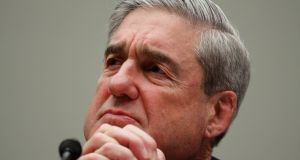 A longtime friend of US president Donald Trump has said Mr Trump is considering whether to fire Robert Mueller, the special counsel investigating possible ties between the president’s campaign and Russian officials.

The startling assertion comes as some of Mr Trump’s conservative allies, who initially praised Mr Mueller’s selection as special counsel, have begun trying to attack his credibility.

The friend, Christopher Ruddy, chief executive of Newsmax Media, who was at the White House on Monday, said on PBS’s NewsHour that Mr Trump was “considering, perhaps, terminating the special counsel”.

“I think he’s weighing that option,” Mr Ruddy said. His comments, on Monday, appeared to take the White House by surprise. “Mr Ruddy never spoke to the president regarding this issue,” Sean Spicer, the White House press secretary, said in a statement hours later. “With respect to this subject, only the president or his attorneys are authorised to comment.”

Allies of the president cast doubt on the idea that Mr Trump would take such a drastic step, and White House officials said Mr Ruddy had not met directly with the president while he was there.

Firing Mr Mueller would be a politically explosive move that would raise new questions about Mr Trump, whose abrupt dismissal of James Comey as FBI director generated accusations of obstruction of justice and led to Mr Mueller’s appointment.

Mr Trump has been known, in moments of frustration and stress, to vent threats of action to members of his inner circle. In the past, some of those private expressions of anger have been made public by friends and associates, only to generate speculation about moves that never take place – including a senior staff shake-up that has yet to happen.

Such moments sometimes reflect the deep division among Mr Trump’s White House advisers about the best course for the president to take in the face of political or legal adversity. Under justice department rules, Mr Trump would seemingly have to order deputy attorney general Rod Rosenstein to rescind department regulations protecting a special counsel from being fired for no good reason, and then to fire Mr Mueller.

If Mr Rosenstein refused, Mr Trump could fire him, too – a series of events that would recall the “Saturday Night Massacre” during Watergate, when president Richard Nixon sought to dismiss a special prosecutor, Archibald Cox.

White House officials referred questions to Mr Trump’s personal lawyer, Marc Kasowitz, as they have recently on all matters relating to the Russia investigation. A spokesman for Mr Kasowitz declined to comment.

The former House speaker Newt Gingrich, a longtime supporter of Mr Trump’s, said in a tweet on Monday that it was time to “rethink” Mr Mueller’s ability to be fair. “Republicans are delusional if they think the special counsel is going to be fair,” Mr Gingrich tweeted after praising Mr Mueller’s integrity in recent weeks. Apparently referring to Federal Election Commission reports, he added: “Look who he is hiring. check fec reports. Time to rethink.”

The idea that the investigation is illegitimate and politically motivated has been gaining currency on the political right for months. Conservative writers, radio hosts and cable personalities – emboldened by the president himself, who has called it a witch hunt – have repeatedly sought to discredit the inquiry, its investigators, the mainstream news accounts of it, and the lawmakers on Capitol Hill who are demanding more answers.

Initially, Mr Comey was the subject of much of their derision. Now they have moved on to Mr Mueller, whom they are attacking as too compromised and conflicted to lead an independent inquiry. In the PBS interview, Mr Ruddy said Mr Trump had considered replacing Mr Comey with Mr Mueller, who served as FBI director during the George W Bush and Obama administrations.

A senior White House official confirmed that the president had interviewed Mr Mueller for the FBI post in the Oval Office the day before Mr Rosenstein tapped him to be the special counsel in the Russia investigation.

Mr Ruddy said the president was weighing whether to dismiss Mr Mueller because of concerns about conflicts of interest. He said those concerns included the interview for the FBI post and connections between Mr Mueller’s law firm and White House officials.

“There are some real conflicts. He comes from a law firm that represents members of the Trump family,” Ruddy said. “I know for a fact that he was under consideration and that the president did talk with him in the days before he was named special counsel. I think there’s a conflict there.”

He also said that he believed it would be “a very significant mistake” for Mr Trump to fire Mr Mueller, but emphasised that he was concerned about what he described as conflicts.

The criticism of Mr Mueller has intensified in recent days, spreading from Trump surrogates like Mr Gingrich to powerful media personalities such as Rush Limbaugh. On his radio programme last week, Limbaugh endorsed the suggestion that Mr Trump fire Mr Mueller.

Mark Levin, another prominent radio host, has also called for Mueller’s firing. “Mueller must step aside,” he wrote on Facebook over the weekend. Much of the criticism has focused on whether Mr Mueller is too close to Mr Comey. The two became friends after working closely together during the Bush administration.

Democrats accused Republicans on Monday of beginning a campaign to smear Mr Mueller’s reputation as he engages in a broad investigation that could include whether Mr Trump obstructed justice by pressuring Mr Comey to end parts of the inquiry and then by firing him.

Adam Schiff of California, the senior Democrat on the House of Representatives intelligence committee, scoffed at the idea that the president might fire Mr Mueller. “If President fired Bob Mueller, Congress would immediately re-establish independent counsel and appoint Bob Mueller,” Schiff said in a tweet. “Don’t waste our time.”

The independent counsel statute, passed after Watergate, allowed the appointment of a prosecutor who would look into high-level executive branch wrongdoing and answer to a panel of judges, and who could not be fired by the president, as Nixon sought to do.

Both Republicans and Democrats came to dislike the statute, which they saw as permitting prosecutors to run amok in the Iran-Contra and Whitewater investigations during the Ronald Reagan and Bill Clinton administrations. Congress let it lapse when it expired in 1999.

It would take a two-thirds supermajority in both chambers of Congress to overcome Mr Trump’s likely veto of any similar legislation. It is far from clear that Mr Schiff’s proposal could command such support.