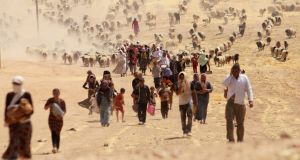 Displaced people from the minority Yazidi sect, fleeing violence from forces loyal to the Islamic State in Sinjar town, walk towards the Syrian border in 2014. File photograph: Rodi Said/Reuters

Yazidi women who survived Islamic State sex slavery have to choose between giving up the children born to them during captivity or expulsion from their ethnic and religious community.

He had called for “accepting all survivors [of Islamic State rapes] and considering what they went through to have been against their will”. His position was in line with a 2015 edict issued by Yazidi spiritual leader, Baba Sheikh, who welcomed the women back but did not take a decision on their children.

Bana Sheikh’s omission enabled the council to reverse its chairman’s ruling by issuing a clarification stating that the decree “does not include children born of rape, but refers to children born of two Yazidi parents”.

The children of Islamic State fighters are to be excluded because Yazidis who marry or procreate outside their community are excommunicated. The mainly Kurdish-speaking Yazidis belong to a distinct ethnic grouping and practice a monotheistic faith with roots in ancient Mesopotamian religions, Judaism, Christianity and Islam.

Popular misconceptions about their beliefs have caused them to be branded “devil worshippers” and subjected to discrimination and abuse.

Well before the mass abductions by the Islamic State terror group, also known as Isis, Yazidi villagers in the Iraqi Kurdish region had been outraged by the failure of the authorities to halt the kidnapping of Yazidi girls by Sunni Kurdish neighbours seeking wives without paying the bride price.

Since the children of Islamic Syate’s Yazidi female captives were fathered by Sunni Muslim fighters of different nationalities and ethnicities, the children cannot become Yazidis and are fated to follow the faith of their fathers in accordance with Middle Eastern tradition and laws in force across the region.

Dozens of women who escaped Islamic State captivity or were freed after the fall of the its “caliphate” in Syria and Iraq have opted to abandon children fathered by Isis fighters, rather than their families and faith community.

Separation is certain to exacerbate trauma among both women and children who have been rendered orphans rejected by Sunni communities as well.

With the aim of providing for Yazidi women kidnapped and enslaved by Islamic State, the Iraqi parliament has tabled draft legislation that will compensate survivors and offer them psychological and physical care, homes, pensions, education and pensions.

The draft law declares Islamic State’s treatment of the Yazidis genocide and sets aside June 3rd to commemorate crimes against this community and honour victims. The draft law has, however, been criticised since it does not include male survivors and children, who, due to the decision of Yazidi elders, have been orphaned.

Commentators argue that reparations should be allocated for all Islamic State survivors but this will take time. Yazidi activist Mirza Dinnayi told Washington-based Al Monitor that the proposed law “is only the first legal step – it should not be the last one”. The law is likely to be adopted without difficulty.

The Iraqi Yazidi community was 500,000-strong before August 2014 when Islamic State swept into the mountainous northwest Sinjar region, where about 10 per cent of the country’s Yazidis lived, and massacred up to 5,000 Yazidi men and elderly people, conscripted boys and abducted thousands of Yazidi women.

Older women were sold as house slaves in ad hoc markets while young women and girls were raped or married to fighters who often passed them on to comrades. Some were forced to endure serial marriages if husbands died in battle. Since the fall of the “caliphate” in 2017, some Yazidis from Sinjar have returned to their home villages while others remain as internally displaced persons in Iraq’s Kurdish region, where there is a sizeable Yazidi community as well as Yazidi holy sites.

1 Wife not entitled to deceased husband's entire estate, High Court rules
2 Coronavirus: From midnight Dublin will move to level three until October 10th - Taoiseach
3 President Higgins says British must face up to their history of reprisals
4 Life in Level 3: What will happen under new restrictions in Dublin?
5 Coronavirus: Public health experts considered idea of moving Dublin to Level 4
Real news has value SUBSCRIBE