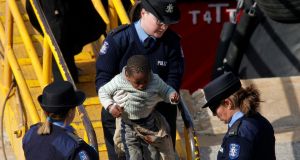 A group of migrants accused of hijacking a merchant vessel in the Mediterranean disembarked in Malta on Thursday after Maltese special forces took control of the vessel. Some of those on board knelt and kissed the ground after arriving on shore in Valletta.

The alleged hijacking came to international attention after Italy’s far-right interior minister, Matteo Salvini, began tweeting about it on Wednesday. Mr Salvini, who has closed Italian ports to humanitarian vessels carrying migrants, said the takeover of the ship was “the first act of piracy on the high seas with migrants”.

Some of the migrants were reported to have taken control of the ship when it became clear that it planned to take them back to Libya.

Maltese officials said 77 men, 19 women, one of them pregnant, and 12 minors, including toddlers, were on the Turkish tanker the Elhiblu 1. Five men were led away in handcuffs, according to local reports.

Advocacy groups say the alleged hijacking was clearly a response to a system that has seen the criminalisation of rescue ships, while refugees and migrants who are intercepted trying to reach Europe are forced back to horrific conditions in Libya.

“This event is just a symptom of a failed, cynical European migration policy,” said Marc Tilley, the head of advocacy for Mission Lifeline, an NGO ship that has been grounded in Malta for the past 10 months, after its crew were accused of operating without a registration or licence.

As events on the Elhiblu 1 unfolded, some of the estimated 5,700 refugees and migrants locked up in official Libyan detention centres became aware of what was happening.

“It’s not good if they return to Libya . . . may God help them,” said an Eritrean currently in a Tripoli centre, where detainees say they have been beaten by guards and abandoned during fighting. They also say food is available only to those who can pay inflated prices. The man messaged The Irish Times through Facebook, using a hidden phone.

Speaking to the UN Human Rights Council earlier this month, UN assistant secretary-general for human rights Andrew Gilmour said that in 30 years he hadn’t heard accounts as harrowing as those he had heard on a recent trip to Niger, where he interviewed refugees who had escaped Libya.

“Every one of them – women, men, boys and girls – had been raped, many repeatedly and tortured by electrocution,” he said.

The reported hijacking of the Elhiblu 1 happened as the EU announced it would stop naval patrols as part of Operation Sophia, the EU anti-smuggling operation in the Mediterranean, which was up for renewal this month. Instead, it will increase air support, aimed at informing the Libyan coastguard where boats are.

The EU is giving tens of millions of euro in support, ships, and training to the Libyan coastguard, which intercepts boats carrying migrants, bringing those on board back to Libya.

“The decision by the EU to stop maritime deployments for Operation Sophia is irresponsible and reckless,” said Hassiba Hadj-Sahraoui, humanitarian affairs adviser with the aid agency Médecins sans Frontières. “For the vulnerable people trying to flee Libya their ‘choices’ are increasingly limited to being stuck in detention centres or dying at sea.”

“It’s not fair, it’s not humanity because Libya is not a free country. It is hell,” said the Eritrean detainee in Tripoli. “Libya is a market of human beings. People are still working as slaves in Libya, so how can people stay in Libya?”

No-deal Brexit’s economic cost for UK ‘could be three times worse than that of Covid’ 20:27
Germany declares Dublin a Covid-19 risk area because of high number of cases in capital 20:25
Cult leader who claims to be reincarnation of Jesus is arrested in Russia 19:38
Breonna Taylor killing: Police officer is indicted by grand jury 18:54
EU unveils plan to overhaul migration 18:54