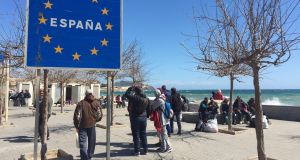 Mohamed arrived in Ceuta only a few weeks ago and since then he has tried to stow away on trucks and lorries boarding ferries for the Spanish mainland several dozen times. But on each occasion, patrolling civil guards have found him. Sometimes their sniffer dogs traced his scent to the inside of a trailer of goods; other times, when he was clinging to the underside of a vehicle, he lost his grip and fell when the civil guards blasted water at him through a hose.

Yet the 17-year-old remains optimistic.

“I want to study, play football, do a lot of things,” he says, speaking in a mixture of Dariya, the Moroccan version of Arabic, and broken Spanish. “My future is looking good.”

Perched on the north African coast, along with its sister city Melilla, Ceuta is technically part of Spain and therefore a magnet for migrants. But it is not within Europe’s Schengen space where free movement is allowed, so those who arrive here find themselves in limbo, caught somewhere between Africa and the European Union.

“I feel like I’m a bit in Spain here, but only about 20 per cent,” says Mohamed. “Ceuta feels like Morocco. ”

He is one of many Moroccan teenage boys who are living in Ceuta in the hope of covertly making the one-hour sea crossing to the peninsula. Local authorities say about 300 such boys stay in shelters run by the local government. But several dozen others sleep rough near the port area in abandoned cars or, like Mohamed, in camps improvised from wooden palettes.

“It’s dangerous when you hide underneath the trailers of the trucks because there are parts that are hot and you can get burnt and the wheels can crush you,” says Imad, another teenager who is sleeping rough by the port.

In February, a 15-year-old Moroccan boy was crushed to death by a truck as he tried to stow away. Chaima Charef, a psychologist who works with many of the youths, had to identify his body.

“They are very persistent kids,” she says. “From what I’ve seen, they are prepared to put up with any conditions, however bad they may be, as long as they can reach their objective.”

Charef is part of a joint scheme organised by the University of Málaga and Ceuta city hall offering support to these migrants and activities such as football training under the supervision of Nayim, a local man who used to play for Barcelona and Tottenham Hotspur.

Charef has noticed an increase in the number of young Moroccans in Ceuta recently. Carmen González, an analyst at the Elcano Royal Institute, a Madrid-based think tank, points to a number of factors driving these youths out of their country. A severe drought in 2017 is among them, along with Morocco’s reintroduction of obligatory military service, which many young males want to avoid. In addition, the northern Rif region has been shaken by social unrest which led to a wave of repression by security forces.

“There’s a lack of hope,” says González. “The feeling among many young people there is that there’s no future for them, or at least no acceptable future.”

Ceuta, like Melilla, is separated from Morocco by a six-metre-high fence that is laced with razor wire to deter migrants from scaling it. Many sub-Saharan migrants still try to enter the cities by doing just that and last July about 600 of them managed to get over the fence in one day. Others swim around the border fence or hide in cars crossing to Spanish territory. Most of those undocumented migrants end up at Ceuta and Melilla’s immigrant temporary stay centres, where they are given lodging and their legal status is processed, which can take several months.

Those from countries that have a bilateral repatriation agreement in place with Spain are likely to be sent back, while others are taken to migrant centres on the mainland.

Moroccans can cross the border more easily than other nationalities, because many of them have permits allowing them to work in the Spanish cities during the day.

Because Morocco and Spain co-operate closely on migration, adults from the north African country who cross to Ceuta and Melilla with the intention of reaching the Spanish mainland tend to be sent back across the border. However, those under the age of 18 are allowed to stay.

González says that 13,000 foreign minors, the vast majority of them Moroccan males, are now officially in the care of the authorities across the whole of Spain.

“Seventy-three per cent of these minors have come to Spain not because they have been abandoned by their families, but because this is a family project, their families have sent them here,” she says.

Several of those who are sleeping rough by Ceuta’s port corroborate this theory, explaining that they have come with their parents’ blessing.

Dressed in hoodies, puffer jackets and baseball caps, Mohamed, Imad and several other boys have gathered in the dark around a truck owned by a baker who has come to hand out food. Such acts of kindness contrast with the attacks some of them say they have suffered at the hands of locals who blame the youths for petty crime and blighting the streets.

A hundred metres or so away is the high cement wall many of them will clamber over the next day in order to reach the port car park and try, once again, to hide away on a vehicle heading for the Spanish mainland.

Yassine, a small 15-year-old whose voice has not yet broken, is among them. He says his parents think he is living in one of the city’s shelters for children, rather than sleeping rough. But Yassine believes he has made the right choice in coming to Ceuta.