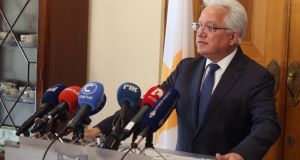 Ionas Nicolaou speaking to media at the presidential palace in Nicosia, Cyprus, after he resigned as justice minister over the failure of police to properly investigate missing person cases. Photograph: EPA/Katia Christodoulou

Cypriot justice minister Ionas Nicolaou resigned on Thursday over the failure of the police to investigate reports of missing foreign women who fell victim to the island’s first serial killer.

The killer’s crimes went undetected for nearly three years, shocking Greek Cypriots, who have called for the resignation of the chief of police as well as the minister.

Admitting there were no serious police investigations after five women and two minor girls were reported missing, Mr Nicolau said: “I have submitted my resignation for reasons of political ethics alone, knowing I have no responsibility for the handling of the reports, nor was I ever informed about them by the police.”

He has called for an “independent investigation that will indicate any gaps in procedures”.

Greek Cypriot national guard captain Nicos Metaxas (35) was arrested only after the body of Mary Rose Tirbucio was discovered on April 14th by a tourist in an abandoned mine shaft. She and her six-year-old daughter Sierra disappeared in May last year. Their flatmate had reported them missing the day after they did not return home.

Police say Mextaxas has confessed to seven killings in total. The body of another victim, Ariana Palanas Lozano, was found in the same mine, and identified by the accused.

He also admitted to murdering Maricar Valdez Arquila, whose body was placed in a suitcase and thrown into a lake near the mine. The three women and the child were from the Philippines.

Romanian Livia Florentina Bunea and her eight-year-old autistic daughter Elena Natalia disappeared in September 2016, and their bodies were consigned to the lake. A friend of Mrs Bunea told The Irish Times her disappearance had been reported to the police a week after she went missing. The seventh victim was Asmita Khadka Bista, from Nepal.

Only four bodies have been recovered so far, two in the mine, one at a military firing range and one at the lake. Only Ms Tirbucio has been formally identified . The other three bodies are badly decomposed and await DNA results. British experts have joined the Cypriot police in dealing with the case.

Metaxas was traced by the police through his conversations with the women on an online dating site where he reportedly made contact with another 30. He was also known to have tried to pick up women while cruising city streets where Asian women congregate.

The justice ministry and police have been accused of racism, particularly since five of the victims are Asians, and thereby from a community who face discrimination and abuse while working in households, restaurants and shops on the holiday island. Of the 32 women still on the missing list, all but three are foreign.

Mr Nicolaou summed up the feelings of many Cypriots when he stated: “The subsequent impact of the abhorrent crime does not touch the police alone but the society itself, and I am referring to attitudes and perceptions that do not do us honour. The police and its members remain part of society, and this is why the search for responsibility concerns us all.”