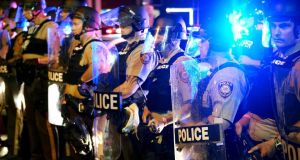 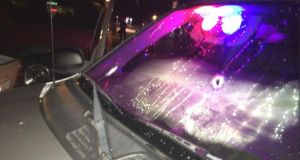 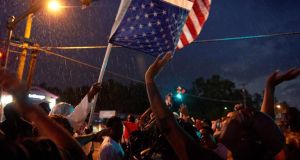 Demonstrators participate in a protest march on West Florissant Avenue in Ferguson, Missouri on Sunday. A day of peaceful remembrance marking the anniversary of 18-year-old black teen Michael Brown’s killing by police in the US city of Ferguson came to a violent end on as gunfire left at least one protester injured. Photograph: Michael B Thomas/AFP/Getty Images.

St Louis County police officers shot and critically injured a man who fired at them in Ferguson late on Sunday night, said authorities, setting this region on another tense and uncertain course on the same day that hundreds gathered to commemorate the anniversary of the killing of Michael Brown, a black teenager, by a white officer.

The shooting came after rival groups began shooting at each other on the west side of West Florissant Avenue, the centre of the Ferguson protests, said Chief Jon Belmar of the St Louis County Police Department. Mr Belmar said that there had been two more shootings in the area and that the police had used smoke canisters.

The injured man, who was not publicly identified, was part of one of the rival groups, said Mr Belmar, and four plainclothes officers saw him running across a parking lot on the opposite side of the avenue. The officers drove their unmarked SUV, with its interior lights flashing, toward him, and he opened fire on the car, said Mr Belmar. The police returned fire from inside the car and then chased the man on foot, he added. Dozens of gunshots were fired, and all four officers shot back and hit the man, who fell to the ground.

A gun that the police recovered from the shooting victim was a 9mm Sig Sauer that was reported stolen last year, said the authorities. Mr Belmar said that the four detectives who had shot the man had from six to 12 years of experience, but he declined to provide information about their race.

The shooting, on an otherwise peaceful day, was another vexing turn for activists and the authorities alike. It was the second consecutive night of gunfire on West Florissant Avenue.

“They were criminals; they weren’t protesters,” said Mr Belmar of the groups exchanging gunfire. “Protesters are the people out there talking about a way to effect change. We can’t afford to have this kind of violence, not only on a night like this but any point in time if we‘re going to move forward in the right direction.”

Mr Belmar said one officer was treated for cuts to his face after being hit by a brick near the spot where Brown, an unarmed, black 18-year-old, was shot dead by a white policeman last year.

Several volleys of gunshots rang out as police tried to disperse demonstrators blocking traffic and smashing storefront windows along a street that was a flashpoint of last year’s unrest in the St. Louis suburb following the slaying of Michael Brown.

Anniversary commemorations for Brown had begun hours earlier with a peaceful march through the St. Louis suburb after a moment of silence for the teenager, whose death on August 9th, 2014, ignited months of demonstrations and a national debate on race and justice.

Guns are drawn in the Ferguson market pic.twitter.com/eSDDBXkmLN

Guns were in evidence nearby.

(1/2) A St. Louis County officer was involved in an officer-involved shooting after comin g under heavy gunfire. pic.twitter.com/L4PqopaEF1

The local police department confirmed an officer was involved in the shooting.

(2/2) During the gunfire, at least 2 unmarked cars took shots. We will release more details when available. pic.twitter.com/luPnp6iXqZ

The scene changed dramatically after dark with dozens of protesters blocking traffic and smashing store windows along West Florissant Avenue, which bore the brunt of last summer’s rioting, chanting “Shut it down” in the midst of a severe thunderstorm.

A phalanx of helmeted police wearing body armour and carrying shields moved in. Protesters briefly fell away before regrouping to confront the line of officers, who ordered them to disperse.

The protesters, locking arms and edging closer to the police cordon, began throwing water bottles and shouting, “We are ready for war!” Both sides held their ground, and police did not move immediately to make any arrests as clergy members and activists circulated between the two sides appealing for calm.

The face-off was shattered by bursts of gunfire, sending police crouching behind their patrol cars and demonstrators scurrying for cover. Helicopters whirred overhead as additional police armed with assault rifles swarmed the area, some roaring down the street in armoured vehicles in the direction of the gunfire.

A body could be seen on West Florissant Avenue and a young woman screamed that her brother had been shot. Multiple store windows were smashed and police stood atop vehicles surveying the scene.

Merchants, some armed, stood guard outside their businesses early Monday after the incident.

“The St Louis County Police Department was involved in an officer-involved shooting after officers came under heavy gunfire,” county police spokesman Shawn McGuire said in a statement. He said at least two unmarked police cars had been hit by gunshots.

Brown’s death – and a grand jury decision to spare officer Darren Wilson from criminal charges for shooting him – sparked a prolonged wave of demonstrations in Ferguson last year that boiled over into rioting and arson at times and spawned sympathy rallies across the country.

It also sparked greater scrutiny of racial bias within the US criminal justice system, giving rise to the “Black Lives Matter” movement that gained momentum from a series of other high-profile slayings of unarmed minorities by white police in cities such as New York, Baltimore, Los Angeles and Cincinnati.

The unrest that erupted on Sunday night was in marked contrast to a day of mostly subdued, peaceful commemorations in Ferguson and elsewhere.

White doves were released after 4½ minutes of silence to represent the roughly 4½ hours that Brown’s body lay in the middle of the street after he was shot. A crowd of about 1,000 then embarked on a silent march through Ferguson to honour Brown and others killed in confrontations with police.

Another name was added to that list on Friday when unarmed 19-year-old Christian Taylor, a black college student, was shot dead by a white police officer investigating a burglary at a car dealership in Arlington, Texas.

A federal review of Brown’s slaying found that officer Wilson acted lawfully. However, it also determined that Ferguson’s predominantly white police department had for years violated the rights of the city’s black population.

The Justice Department report found police were singling out African-Americans for arrests and ticketing, in part to raise revenue for the city. It also found a pattern of excessive force, including the use of attack dogs and electric stun guns, by police against unarmed black citizens.