Donald Trump indicates he would accept wall of steel

US president Donald Trump says he is considering declaring a national emergency to build the US-Mexico border wall without approval from Congress. Video: The White House 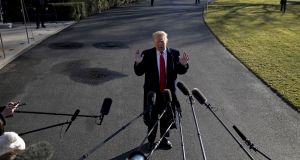 US president Donald Trump says he may announce a national emergency to build the Mexican wall if Congress does not grant money for project. Photograph: Andrew Harrer/Bloomberg

Donald Trump said a steel barrier would satisfy his demand for a wall along the US-Mexico border on Sunday, as the partial shutdown of the government looks set to continue into its third week.

The US president, and his acting chief of staff, reiterated comments that a concrete wall was not strictly necessary as they attempted to reframe Mr Trump’s demands as a call for the sort of border fencing constructed under previous US presidents.

“We have to build the wall or we have to build a barrier,” said Mr Trump to reporters before he left the White House for Camp David. “The barrier or the wall can be of steel instead of concrete if that works better,” he added.

Mick Mulvaney, the White House acting chief of staff, said on NBC’s Meet the Press that Mr Trump was willing to “take a concrete wall off the table”.

“If he has to give up a concrete wall, replace it with a steel fence in order to do that so that Democrats can say, ‘See? He’s not building a wall any more,’ that should help us move in the right direction,” said Mr Mulvaney in comments aired on Sunday morning.

Talks between Democrats and the White House to end the shutdown ended on Saturday without visible progress. The two sides are set to continue negotiations on Sunday afternoon, but Mr Trump said he did not expect a breakthrough.

“I don’t expect to have anything happen at that meeting . . . but I think we’re going to have some very serious talks come Monday, Tuesday, Wednesday,” he told reporters.

Hundreds of thousands of federal employees have been on leave or working without pay since December 22nd after the White House and Congress failed to agree a funding Bill to keep the entire government open. Roughly a quarter of federal agencies, including the department of justice and department of homeland security, are affected.

Mr Trump has demanded $5.6 billion in funding for a border wall and has said he would continue the partial shutdown for months, or even years, if his demand was not met. A border wall was Mr Trump’s signature promise during the 2016 presidential campaign. He insisted Mexico would pay for the wall, which the southern neighbour has refused to do.

Some 650 miles of the almost 2,000-mile US-Mexico border is already covered by various forms of fencing, much of it built as a result of the Secure Fencing Act of 2006, which was signed by George W Bush.

Nancy Pelosi, the Democratic leader in the House, has refused to offer any money for a wall. On Thursday, Democrats, who recently regained control of the lower chamber, passed a Bill that would fund the government but not a wall.

Chuck Schumer, the top Democrat in the Senate, has offered funding for border security measures but no money for Mr Trump’s wall, which Democrats regard as an ineffective waste of money.

The idea has also been criticised by Republicans. In 2015, Mr Mulvaney dismissed Mr Trump’s calls for a barrier on the US-Mexico border as too simplistic, calling the demand “absurd and almost childish”. He said on Sunday that circumstances on the ground had changed and so had his view.

In December, the Republican-controlled Senate passed a short-term funding Bill that would have kept the government open. The Bill did not include money for a wall.

Mitch McConnell, the Republican majority leader in the Senate, has said he will not bring another funding Bill for a vote until the White House and Democrats have come to an agreement.

Mr Trump has said he may announce a national emergency to build the wall if Congress does not grant money for the project, a dramatic step that will probably be challenged in the courts.

“Presidents have authority to defend the nation,” said Mr Mulvaney on CNN’s State of the Union on Sunday. The acting chief of staff said Mr Trump had asked his cabinet secretaries “to try and find money that we can legally use to defend the southern border”. – Copyright The Financial Times Limited 2019