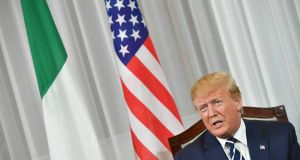 US president Donald Trump has declared “income” last year of $13.47 million (€11.43 million) from his golf hotel business in Doonbeg, Co Clare, according to his latest financial disclosure.

The figure is a slight drop on the $14 million in income he declared for the business for 2018 in his disclosure to the US Office of Government Ethics last year.

The disclosures are self-declared and are not audited. The income he declared from Doonbeg is described in the document as “golf-related revenue”.

In business in the US, revenue is usually a reference to a gross figure from which costs have to be deducted to give the profit figure.

It is not clear whether the US president is claiming that the declared income is money he received from the property, or that the business generated that amount in revenue before costs were deducted, although the latter seems the most likely.

In the latest disclosure, the US president put a value of between $25 million and $50 million on the Trump International Golf Links with an address in Doonbeg, the same range within which he put the asset’s value in his previous year’s disclosure.

It is likely the revenue from and value of Mr Trump’s family assets have been hit hard by the coronavirus pandemic. Many of his hotels and resorts have been closed amid the Covid-19 crisis.

The total declared income/revenue from all his family assets was $446.3 million, an increase of 2 per cent on the previous year, and the total value of the assets was declared as $1.35 billion, down slightly on the 2018 figure.

Mr Trump bought the Doonbeg property in 2014, reportedly for €9 million. He stayed there with members of his family last year, as did his vice-president, Mike Pence, on a separate occasion.

The financial disclosures that have been made by Mr Trump since he took up residence in the White House do not indicate that his family’s businesses have profited greatly as a result of his presidency.

Eric Trump, Mr Trump’s son, who runs the family business with his brother, Donald Trump jnr, said in a statement after the publication of the latest disclosure that “2019 was a fantastic year for our country and one of the best years in the history of the Trump Organisation”.