Moussa has lost sight in one eye and still has shrapnel buried in his head - injuries sustained during the civil war. Now in a refugee camp in Lebanon he hopes to make a new home, in Ireland. Video: Unreported World / Channel 4 News 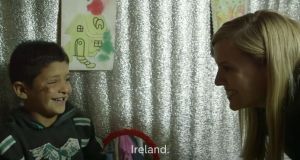 Moussa tells journalist Shaunagh Connaire that he wants his family to be resettled in Ireland. Photograph: Screenshot from Channel 4 Unreported World documentary.

An online petition is calling for a young boy injured in the Syrian conflict to be brought to Ireland after he appeared in a documentary which calls for greater support for Syrian children suffering from chronic diseases.

Moussa, who lost his sight in one eye from a rocket attack in Syria, tells the Channel 4 documentary he hopes his family will be resettled in Ireland.

Speaking in his family’s makeshift home in Lebanon, Moussa Salameh points at a drawing saying “this is us, this is where we will be travelling”. Asked where the house in the drawing is located, he replies “Ireland”.

Irish journalist Shaunagh Connaire travelled to Lebanon to report on the seriously sick refugee children who are “falling through the cracks” of the UN Refugee Agency’s (UNHCR) resettlement programme.

The Unreported World documentary follows the stories of two young boys - one with cancer and the other with a blood disorder - whose families are struggling to pay for treatment and who hope to be resettled in Europe and the United States.

Connaire says both families claimed they were dropped to the bottom of the list when UNHCR discovered their children had chronic illnesses while more healthy family members were offered homes in Europe. They have relied on local charities and support from friends to get medical treatment for their sick children.

While in Lebanon, the Channel 4 team also met 10-year-old Moussa from the town of Moadamiyat al-Sham in southern Syrian. Moussa lost his sight during an attack on his hometown in 2013 and still has shrapnel buried in his head. His parents fear their son will lose his sight entirely if he does not get the necessary medical treatment.

Two years ago Moussa’s brother Mohammed died in Lebanon from a heart defect. Moussa’s father Ahmed Salameh explains that he hoped the UNHCR would prioritise the family’s case for resettlement because of Mohammed’s condition but that the medical help never arrived.

“I couldn’t do anything,” he tells the reporter. “I begged everyone. I kissed their feet.”

Ahmed says they have been interviewed by the UNHCR eight times and that they’re being considered for resettlement but that no country has accepted them yet.

Despite the pain of his injury, Moussa is playful and talkative in the interview, showing the reporter the drawing of the home he hopes his family will live in future.

“We were having a little chat in the tent and I spotted the picture and assumed it was his house in Syria,” said Ms Connaire. “ I asked where it was and he said ‘Ireland’.

“I have about 30 words of Arabic and had told him I was from Ireland before but really I have no idea how he knew about Ireland.”

An Uplift online petition is now calling for the Irish Government to offer sanctuary and medical treatment to help save Moussa’s eyesight.

“This little boy needs urgent medical care which Ireland can provide, and he does not have time to waste,” writes a post which accompanies the petition. “We have the capacity to sponsor this family and many of us are willing to do what we can financially, socially, emotionally to support this boy’s family to get to Ireland.

“Let’s make this happen for Moussa and start the important conversation about refugee family sponsorship in Ireland.”

Speaking in the documentary, UNHCR spokeswoman Dana Sleiman explains that the agency must prioritise how they spend their limited funding when supporting refugees.

“We have to make sure that, unfortunately, that people who have better chances at prospering are resettled,” she said. “Just uttering the words makes me feel really bad. But this is the difficulty of the job.”

Jody Clarke from UNHCR Ireland told The Irish Times the agency was seeking places to resettle half a million Syrian refugees globally but to date has only found half this number.

“There’s never enough places, not just for Syrians but any refugees,” said Mr Clarke. “Because of this even people who really need medical cannot be resettled. But we would urge the Government to take as many medical cases as possible.”

Mr Clarke added that he did not expect the Government to meet its target of taking in 4,000 refugees by the end of 2017.