Despite US threat of sanctions, international firms from 30 countries exhibit at the event 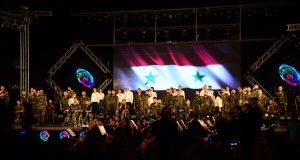 Damascus’s 61st International Fair opened this week with a spectacular sound and light show, singing and dancing, and a message of hope for a future without war.

Despite a US threat to sanction countries and international companies participating in the fair or who do business with Syria, firms from 30 countries are displaying their wares at the event.

Two regional actors are present for the first time, the United Arab Emirates and Oman. They have sent large delegations and entered elegant exhibits. In a display of unity, the Emirati attendees comprise representatives from all seven members of the UAE federation, distinct in their white robes and head coverings.

Among other countries participating are US allies Pakistan, India, Afghanistan and Brazil, as well as the Philippines, which set up shop next to Syria’s friends Russia, Iran, China, Cuba, South Africa, Algeria, Iraq, North Korea and Venezuela. North Macedonia is another newcomer while the Czech Republic has the sole EU stall.

Syrian firms exhibit pistachios, tinned fruit and vegetables, jars of apricot jam, packets of coffee and biscuits, and machinery, but absent are pharmaceuticals and other goods formerly manufactured in Aleppo’s devastated industrial estates.

Several thousand cheerful Syrians flock to the new fairground located on the international airport highway, tour the exhibits and settle on plush-seated chairs beneath the stars at an event revived two years ago after Damascus had regained its suburbs from rebels and radical fundamentalists.

The emblem of the city, a rose, flashes on screens mounted behind a broad stage. Mozart is composer of the evening for the opening of the fair on Wednesday, beginning, ironically, with the Turkish March (Rondo alla Turco) while Syrian troops now surround a Turkish military outpost established in southern Idlib, the last of the country’s provinces held by radicals.

The Trump administration has not soured the atmosphere with its warning to regional businessmen and chambers of commerce that “anyone doing business with the Assad regime or its associates is exposing themselves to the possibility of US sanctions”.

The theme of the show is post-war rejuvenation, symbolised by a grey bearded man – who looks very much like Ernest Hemingway – telling a small boy the story of Syria as they work at a loom weaving the fabric of a new, post-war country. As his resonant voice booms out over the throng, black and white snapshots of Syrian divas singing old favourites at fairs in earlier, happier times flash on the screens and merge with technicolour men and women portraying Syria’s present perils and achievements.

Syria is not alone

While the wooden beam of the loom moves back and forth, the weaver speaks of the ancient Silk Road linking a network of trade routes between China, India, the Gulf, Arabia,the Levant, Africa and Europe. Two-thousand-year-old Palmyra, in eastern Syria was the key hub. The reopening of the Silk Road’s central route is portrayed by scenes and dancers from China and Iran. Russian singers take to the stage with background images of Russian fields, mountains, the Kremlin’s fairy tale domes, St Petersburg’s palaces and thrusting ports. Foreign faces at the fair make the point: Syria is not alone.

Although petrol is scarce, traffic is heavy as we drive back to Damascus where home, shop and street lights blaze into the night. Power cuts occur less frequently, water flows into homes and security has improved, but sanctions bite deep into the economy.

Firms that survived and even thrived during the fighting phase of the war are faltering and failing. Economic warfare is growing in strength. A businessman says some companies from neighbouring Jordan and Lebanon brave Washington’s sanctions but they are few.

Syria’s currency has depreciated. There is no foreign investment for reconstruction, no Marshall plan for Syria. The government rebuilds infrastructure in areas of the country under its control, Syrians do what they can to reclaim homes, farms and firms. The post-conflict economic bounce has not come.

The fair brings hope of better days. Several friends say, “All we have is hope.”