The Government has agreed an aid package of some €3bn to deal with the public health and economic impact of coronavirus. 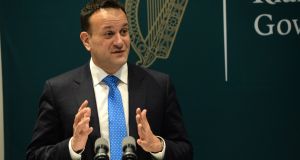 Private sector workers affected by coronavirus are to receive a new higher level of sick pay of €305 per week from their first day of illness under a new €2.4 billion initiative announced by the Government.

Taoiseach Leo Varadkar said on Monday that existing conditions surrounding sick payments, such as having a specific number of PRSI contributions, would be waived. Payments will also be available to the self-employed.

He said the existing requirement under which claimants had to wait until the sixth day of their illness to receive sick benefit would not apply, so the payment would come into force straight away.

“The whole objective here is to ensure that workers would not be afraid to follow advice to self-isolate due to economic necessity.”

The Taoiseach said emergency legislation to change the existing rules governing sick pay would be introduced in the Dáil next week. The Seanad will also have to be recalled to pass the legislation.

The Government aims to backdate the new sick pay arrangements to apply from the decision of the Cabinet subcommittee to introduce the new measures on Monday.

The new sick payments will be at a higher rate than the existing benefits.

The Government said that “to contain the transmission of Covid-19, the personal rate of illness benefit will be increased from €203 per week to €305 per week for a maximum period of two weeks of medically certified self-isolation, or for the duration of a person’s medically certified absence from work due to Covid-19 diagnoses.”

It said it would also remove the means-test requirement for Supplementary Welfare Allowance in respect of medically certified cases of self-isolation.

The Government also said self-employed people would be entitled to receive either illness benefit or non-means-tested Supplementary Welfare Allowance.

The new financial package for private sector workers comes on foot of strong representations to the Government from trade unions and employers .

The Government had already decided last week that State employees would receive special leave with pay if they had to self-isolate in line with HSE advice and where flexible working arrangements were not possible. This was largely on foot of a civil service circular dealing in part with infectious diseases dating from 1976.

Last Wednesday the general secretary of the Irish Congress of Trade Unions Patricia King told Mr Varadkar in a letter that some private sector workers affected by the coronavirus would not be be able to afford to self-isolate by staying away from work.

She called on the Government to uphold the net incomes of workers hit by the Covid-19 outbreak either through the social welfare system or the provision of special temporary payments.

The employer’s group Ibec proposed that a special payment at the level of jobseekers’ benefit should be put in place for a two-week period.

In a statement on Monday Ms King said it was of the utmost importance to uphold the net incomes of all affected workers and that there was an onus on employers to pay their employees. She said this should not fall entirely on the State.