Charlottesville one year on: ‘Sometimes change and justice only come through discord’

The governor of Virginia has declared a state of emergency in Charlottesville and local police have declared an unlawful assembly alert amid clashes ahead of a planned white nationalist rally on Saturday, August 12. Video: Reuters 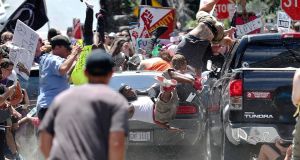 A car is driven into protesters demonstrating against a white supremacist rally in Charlottesville, Virginia, on August 12th, 2017. One woman, Heather Heyer, died and 19 were injured. Photograph: AP

Located in the heart of Virginia near the foothills of the Blue Ridge Mountains, Charlottesville is one of the most historic towns in the region. The college town was once home to presidents Thomas Jefferson and Woodrow Wilson, connections the city proudly celebrates.

On this balmy summer evening locals are sitting outdoors having dinner along the pedestrianised downtown mall as jazz wafts through the air from a nearby bar. Tourists park up their bikes at the end of an arduous day of cycling in the nearby Shenandoah valley.

But last year this idyllic part of oldtime America became the scene of unimaginable terror as a white supremacist rally unfolded on its streets. Next weekend marks the one-year anniversary of the events that shocked the country, and became one of the defining moments of Donald Trump’s presidency.

On the night of August 11th, a group of demonstrators marched through the University of Virginia campus less than a mile from downtown Charlottesville chanting slogans such as “white lives matter” and “Jews will not replace us”. Holding torches and chanting, they attacked a group of students who had gathered to protest at their demonstration.

Despite the violence, the protests resumed the following day in the centre of town near Emancipation Park. What followed was a day of violence and rioting. By 11am, the city of Charlottesville had declared a state of emergency. A few hours later a car drove into a group of protesters, killing one woman, Heather Heyer, and leaving 19 people injured.

The sight of white supremacists clashing with protesters as authorities looked helplessly on shocked America and the world.

The political fallout also escalated after Trump equated the behaviour of the counter-protesters with that of the “Unite the Right” rally, saying “both sides” were to blame for the violence. The accusation that the Trump presidency had legitimised and emboldened white nationalism is something that continues to dog the president.

One year on, the people of Charlottesville are preparing to mark the anniversary of an event that put their city on the world stage for all the wrong reasons.

Ben Doherty has lived in Charlottesville for 18 years, and works at the University of Virginia, where the protests began last year. He was present at last year’s rally, witnessing the violence firsthand.

“It was a day soaked with violence,” he says of the August 12th protests in the centre of town. “There were hundreds of people carrying shields, using sticks to attack people. They were marching in units, military-like. You never knew where you were going to encounter them. The whole day was filled with violence, with skirmishes.”

And while Doherty was shocked by the violence and blatant displays of white supremacy, he was not surprised. “While much of the focus has been on last August’s violence, in fact several protests had taken place in Charlottesville in the preceding months.”

These included a Ku Klux Klan rally on July 8th last year, during which around 40 klan members, dressed in full klan regalia, held a protest in the city.

The ostensible trigger for last year’s eruption of white nationalism was the decision by the city of Charlottesville to move a statue of civil war general Robert E Lee from a city centre park.

In this sense last year’s violence in Charlottesville was not just a one-off event – it took place against a background of growing discord and debate across the US about the role and place of confederate statues in contemporary American life.

The American civil war came to an end more than 150 years ago, culminating in the abolition of slavery following the victory of the Union side, led politically by Abraham Lincoln. Yet its legacy remains divisive.

Along with the confederate flag – the official flag of the defeated southern army – statues to so-called “heroes” of the southern confederacy such as Lee and Jefferson Davis are fiercely contested.

While for some southerners they are a symbol of a “lost history” that should not be forgotten, for others, particularly African-Americans, they are symbols of white supremacist power.

“These statues present a false telling of history, a myth and propaganda that has been perpetuated since the early 1900s, when most of these statues were erected. They try to portray the American south as a place of heroism rather than a place of moral failure.”

Even before the events in Charlottesville, cities across the south had moved to take some public monuments down. In one of the most high-profile cases, New Orleans removed a figure of Lee last year.

Cities like Memphis followed suit. Having voted to remove a statue of Nathan Bedford Forrest, a civil war general and founder of the Ku Klux Klan last year, the city of Memphis removed the statue earlier this year after Charlottesville despite protests and threats of legal action.

But in Charlottesville the statue that prompted last year’s violence is still standing. Two blocks north of the downtown mall stands the huge figure of Lee on horseback.

On this summer evening there is a quiet, vaguely uneasy atmosphere in the park formerly known as Lee Park but renamed Emancipation Park last year. While tourists and locals pack into the main street nearby, the area around the Lee statue is deserted.

In the immediate aftermath of last year’s violent clashes the city council ordered that the statue, and a nearby monument to confederate hero Stonewall Jackson, be covered with a black tarpaulin. Yet in February a judge ruled that the tarps should be removed.

The fate of Charlottesville’s confederate monuments remains in limbo – while the city council voted to remove them, a local group has sued the council, citing a Virginia state law which protects war memorials.

While the prominence of the city’s confederate statues are a telling indication that the controversies of last summer’s violence are far from over, the legacy of the region’s controversial history of race relations is evident in other ways.

The University of Virginia (UVA) has itself come in for criticism for its handling of last year’s protests which began on its campus. In particular, its racist roots have also come under the spotlight.

The university was founded by Thomas Jefferson, the third American president and principal author of the Declaration of Independence. Jefferson’s legacy is controversial. Despite his famous assertion that “all men are created equal”, he was a wealthy slave-owner who used slave labour to maintain his mansion and plantation in Monticello, a popular tourist destination near Charlottesville.

The “Unite the Right” rally gathered near the statue of Jefferson in front of the university’s famous rotunda on the evening of August 11th last year, and the university has been criticised for failing to protect its students who were attacked.

Richard Spencer, a prominent white nationalist and organiser of last year’s rally, is a UVA graduate, as is fellow-organiser Jason Kessler, though the university banned Kessler from the campus earlier this year following disturbances at the university’s law library when he visited.

Just this week UVA found itself at the centre of renewed controversy after two professors resigned over the decision to appoint former Trump administration official Marc Short to the university’s Miller school of public affairs as a senior fellow.

In their resignation letter William I Hitchcock and Melvyn P Leffler criticised Short for not distancing himself from Trump’s response to last year’s protests.

“By not speaking out at the time, by not emphasising the threats to human decency posed by the public display of Nazi symbols and racist diatribes in our own neighbourhood, Mr Short was complicit in the erosion of our civic discourse and showed an appalling indifference to the civility of our own city and university.”

But despite the divisions that remain in this community as it grapples with its history, there are signs that the events of last summer are prompting change.

The city elected its first African-American female mayor this year. Nikuyah Walker, who had been an outspoken critic of the former mayor’s handling of events last August, was elected by the council in January. An application by Kessler to hold a “Unite the Right” rally next weekend was rejected, though a far-right rally is expected in Washington DC.

Others believe that the violent events of last summer have been a wake-up call for Charlottesville residents, particularly the white community.

“I think what people are beginning to wake up to is the reality of race in this city and this country,” says Doherty. “There has definitely been a shift in perspective. It goes way beyond having klan members marching through your town. Racial inequality is evident in other ways, such as housing for example.”

Reverend Brittany Caine-Conley, a minister at the United Church of Christ, also believes that last year’s events could prompt a more serious engagement by people with the issue of race relations and racial inequality. She is organising a cross-community service next Friday to mark the one-year anniversary of the protests.

And while next week’s service will be a service of healing and reparation, she also hopes that it will spur people to continue the fight against racism.

“For a lot of folks here the hope is that they can just ‘get along’, that they can go back to business as usual. But I think last year’s events were a wake-up call, that it is important to be uncomfortable sometimes and to challenge the status quo. Sometimes transformation, change and justice only come about through discord.”

For many in Charlottesville, one year after last summer’s violent events, the fight against racism and racial inequality is far from over.