Case against Paul Manafort may go to jury this week 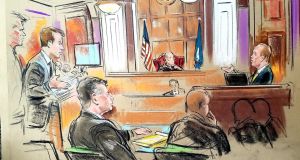 US prosecutors plan to wrap up their tax and bank fraud case against former Trump campaign chairman Paul Manafort on Monday, making it likely the case will go to the jury by midweek if the defence decides not to call any witnesses.

The trial is in its 10th day in Alexandria, Virginia, federal court and was scheduled to resume on Monday afternoon. The case arose from US special counsel Robert Mueller’s probe of Russian meddling in the 2016 presidential election.

Before completing their case, prosecutors will call James Brennan, an executive at the Federal Savings Bank. On Friday, a former salesman at Federal testified that the bank’s chief executive personally approved $16 million in loans to Mr Manafort while seeking his help getting a post in US president Donald Trump’s cabinet.

The prosecution also wants to recall Paula Liss, an agent with the Treasury Department’s Financial Crimes Enforcement Network. The defence is seeking to block further questioning of her, and the judge has not yet ruled. Ms Liss testified last week that Mr Manafort did not disclose his foreign bank accounts.

Mr Manafort’s lawyers will then face a choice: call their own witnesses or hope the prosecution’s case is not strong enough to outweigh defence attacks on the credibility of Rick Gates and the testimony of more than two dozen other witnesses.

Mr Gates testified last week that Mr Manafort, his former boss, directed him to help commit the tax and bank frauds, but the defence portrayed him as living a “secret life” of infidelity and embezzlement.

Prosecutors contend Mr Manafort hid a significant portion of the approximately $60 million he earned as a consultant for pro-Russian politicians in Ukraine, then lied to borrow millions more in a bid to maintain an extravagant lifestyle when the Ukraine work dried up.

Shanlon Wu, who represented Mr Gates before he pleaded guilty in February and started co-operating with Mr Mueller’s investigation, said he expected the defence to rest its case and move on to closing arguments.

While the prosecution has built a solid case, Mr Manafort’s lawyers appeared to have raised some doubts about the testimony of Mr Gates and other witnesses, Mr Wu said.

“The big question is, did the government do enough to show willfulness,” said Mr Wu, who is no longer involved in the case and said he was speaking from knowledge of the publicly available evidence.

If the defence decides not to call any witnesses, the court may on Monday hold a conference with the lawyers to decide what instructions should be given to the jury before they begin deliberations, Judge TS Ellis said on Friday.

Closing arguments may take place on Tuesday. Judge Ellis ordered each side to limit its summation to two hours.

It was unclear if the judge will make public the reason behind an unexpected recess on Friday that lasted into the midafternoon and included a lengthy discussion with the lawyers and judge at the bench, the contents of which remain under seal.

Some legal experts have speculated that it may have been triggered by a problem with the jury after Judge Ellis reminded jurors in unusual detail and multiple times about the defendant’s presumed innocence, the need to “keep an open mind” about the trial and not to talk to anyone about the case.

“My sense is that it probably has to do with juror misconduct,” said Joshua Dressler, a law professor at Ohio State. But it was not likely severe enough to prompt the judge to declare a mistrial, he said, noting Judge Ellis resumed witness testimony on Friday afternoon. – Reuters