Caspian Sea nations poised to sign accord on rights to resources

Russia, Iran, Azerbaijan, Kazakhstan and Turkmenistan to agree on transit and use 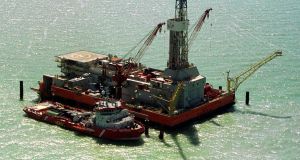 After more than two decades of talks, the five nations surrounding the Caspian Sea plan to finalise an agreement this weekend on the status of the huge inland body of water famous for its oil and caviar riches.

Once shared by the Soviet Union and Iran, governance of the Caspian was thrown into disarray by the demise of the USSR when four successor states – Russia, Azerbaijan, Kazakhstan and Turkmenistan emerged along its shores, each claiming rights over its “black gold” resources.

Over more than a quarter of a century, the Caspian Five have argued over how to divvy up the offshore, establish shipping, fishing and military rights and ensure environmentally safe development of strategic oil and gas resources.

An end to the stalemate is expected to come on Sunday when all five Caspian heads of state plan to meet in Aktau, an oil port in Kazakhstan, to sign a convention on the legal status of the Caspian Sea that could set the stage for greater economic and security co-operation in the area.

Negotiations of the treaty have centred on a debate over whether the Caspian should be defined as a sea – and thereby governed by principles of international maritime law, or as a lake where there are no global rules.

Full details of the draft convention have not been revealed and it’s possible that Caspian foreign ministers holding talks in Aktau on Saturday may still be fine tuning the wording ahead of the summit on Sunday.

What’s known is that a special legal status for the Caspian has been agreed where the seabed with its rich energy resources is divided into sovereign sectors determined by median lines while the waters are for common usage save for a 16km zone around each littoral state’s coastline.

This arrangement allows for the free flow of shipping across the Caspian, which is growing in importance as a trading route between Central Asia and Europe, Russia and the Middle East. However, foreign vessels will be barred from the Caspian altogether, reflecting security concerns in the area where Russia vies with China and the US for geopolitical influence.

Terms of the Caspian convention had been agreed “without dictate or arm twisting”, Grigory Karasin, Russian deputy foreign minister said this week. “We were calm and pragmatic when working on a code of conduct in our common water basin in order to make it acceptable for everyone. After all, we are neighbours and want to live in peace and friendship,” he told the Russian newspaper Kommersant.

Russia, Kazakhstan and Azerbaijan earlier signed bilateral offshore boundary deals with their neighbours to allow oil and gas developments to go ahead in potentially contested waters without waiting for the overarching convention to be signed.

Iran, having held out for the division of the Caspian into five equally sized sovereign sectors stands to lose most in territorial terms from signing the treaty. When delineated along median lines, its sector will amount to just 14 per cent of the seabed, a smaller share than any of its fellow Caspian states.

Russia has also had to compromise, setting aside objections to the construction of export pipelines across the Caspian to bring Central Asian oil and gas to European markets to compete with its own supplies.

However, multibillion projects like these take years to organise. In the meantime Russia, already building up its naval presence in the Caspian, has won military dominance in the area.