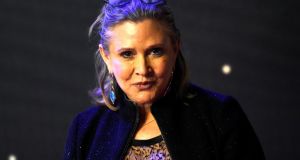 Carrie Fisher was returning to Los Angeles after being in the UK to film the third season of the British television comedy Catastrophe. Photograph:Paul Hackett/File Photo/Reuters

Carrie Fisher, the actor beloved for her portrayal of Princess Leia in the original Star Wars trilogy, is being treated in intensive care after suffering a serious heart attack on a flight to Los Angeles from London, her brother has said.

Todd Fisher said the 60-year-old Star Wars legend was receiving treatment in an intensive care unit of a Los Angeles hospital after suffering a medical emergency on the United Airlines flight from London on Friday.

He added his older sister was receiving excellent care, but said he could not classify her condition. He had earlier told reporters that she had been stabilised and was out of the emergency room.

But he later clarified his comments: “It’s not fair to say ‘stable’. I am not saying she is fine, or not fine,” he told Reuters by telephone. “She is in the ICU.”

But in a subsequent interview he said many details about her condition or what caused the medical emergency are unknown.

A large gathering of reporters was camped outside the Ronald Reagan UCLA Medical Center in Santa Monica where TMZ and the Los Angeles Times reported she had been taken.

A United Airlines statement said: “Medical personnel met United flight 935 from London to Los Angeles upon arrival today after the crew reported that a passenger was unresponsive.

“Our thoughts are with our customer at this time and any requests for additional information should be directed to local authorities.”

A number of unnamed sources spoke to news outlets. One who said they were not authorised to discuss the incident, told the Los Angeles Times Fisher was “in a lot of distress on the flight”.

People who said they had been on board the plane detailed the incident on Twitter. One, the YouTube star Anna Akana, wrote: “She wasn’t breathing for 10 minutes or so. They were administering CPR up until we landed.

“So many thanks to the United flight crew who jumped into action, and the awesome doctor and nurse passengers who helped.”

Fisher, 60 and the daughter of the Hollywood couple Eddie Fisher and Debbie Reynolds, rose to stardom as Princess Leia in the original Star Wars trilogy. She recently published The Princess Diarist, her eighth book, about playing the role.

She was returning to Los Angeles after being in the UK to film the third season of the British television comedy Catastrophe.

She has written extensively about her struggles with fame and addiction.

Her first novel, published in 1987, was Postcards from the Edge, a thinly veiled autobiography about a cocaine-addicted actor trying to put her life together after a drug overdose. It was adapted into a 1990 film starring Shirley MacLaine and Meryl Streep.

A one-woman show, Wishful Drinking, played on Broadway. It was filmed for HBO and also became a book.

Fisher revealed in her new book that she and her Star Wars co-star Harrison Ford had an on-set affair that they kept secret for decades . She was also once married to the singer Paul Simon.

Ford and Fisher were reunited on screen in The Force Awakens, last year’s seventh record-breaking entry in the Star Wars series. Fisher had recently finished filming on the eighth film, which is due to be released next year.

Mark Hamill, who plays Luke Skywalker in the Star Wars films, used Twitter on Sunday to say: “As if 2016 couldn’t get any worse... sending all our love to @carrieffisher .”

Peter Mayhew, the actor who played the wookiee Chewbacca, said : “Thoughts and prayers for our friend and everyone’s favorite princess right now.”