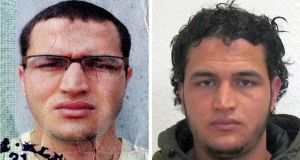 The nephew of Anis Amri, the 24-year-old chief suspect in the Berlin Christmas market attack that left 12 people dead, has been arrested in Tunisia along with two other men, according to the country’s interior ministry.

Amri was shot dead in Milan on Friday after pulling a gun on police officers during a routine search.

According to AFP, a ministry statement said the suspects, who were arrested on Friday, were members of a “terrorist cell. . . connected to the terrorist Anis Amri who carried out the terrorist attack in Berlin”.

The ministry said Amri had sent his 18-year-old nephew Fedi money to join him in Europe.

It is unclear whether the suspects helped Amri flee Berlin.

The nephew was arrested in Amri’s home town of Oueslatia while the others were arrested in Tunis.

The ministry said the men and had been in touch by social media messaging with Amri.

He said police and security forces were studying the information and deciding whether to make any arrests.

In a video released on Friday after his death, Amri is seen pledging his allegiance to militant group Islamic State leader Abu Bakr al-Baghdadi.