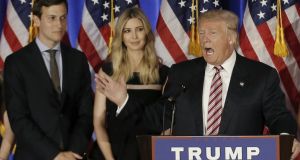 The possibility of Donald Trump monetising voters into viewers after the US presidential election with his own-branded TV channel seems to be at least an idea that one of the businessman’s closest aides has explored.

The Financial Times reported on Monday that Jared Kushner, the Republican presidential candidate’s son-in-law and one of his closest confidants, had informally discussed the idea for Trump TV with Aryeh Bourkoff, the chief executive of boutique investment bank LionTree who has advised mega-media deals.

Mr Kushner, the owner of the New York Observer newspaper and husband to the businessman’s daughter Ivanka, and Mr Bourkoff reportedly held tentative discussions around the setting up of a television network to channel support for the Trump campaign into profits. The discussion is said to have taken place within recent months, though the idea has not been developed further.

The investment banker has worked on some of the media industry’s biggest transactions, including Liberty Global’s $23 billion (€21 billion) takeover of Virgin Media and Verizon’s $4 billion takeover of AOL.

The Republican’s campaign and LionTree has not commented on the latest reported back-room manoeuvres within the Trump campaign to capitalise on the populist movement the tycoon has sparked.

Suspicions about the candidate’s post-election plans, should he lose, have been fuelled by the involvement of Fox News founder and former chairman Roger Ailes and Steve Bannon in Mr Trump’s campaign.

Mr Bannon joined as campaign chief executive from the provocative conservative website Breitbart. A non-compete clause that Mr Ailes signed with Fox under the terms of his departure following sexual harassment allegations during the summer would, it is thought, prevent Mr Ailes from working for a rival TV network but only for a period of time.

Mr Trump trails Democrat Hillary Clinton in some polls by double-digits with just three weeks until election day – a gap that no candidate has closed in modern US elections at this stage of a campaign.

He has unleashed a torrent of abuse against the US media that has been growing in line with his declining poll numbers. On Sunday he tweeted about the election being “rigged by the dishonest and distorted media”.

The Republican candidate has limited his television appearances largely to interviews on Fox News and the conservative network’s host Sean Hannity, a self-professed Trump supporter and informal adviser.

Mr Trump has denied that he is seeking to launch a television network if he loses. “I have no interest in a media company – false rumour,” he told the Washington Post last month. Establishing a television network could prove difficult, requiring significant cash investment and the support of cable providers.

But the support he enjoys among right-wing commentators such as Ann Coulter and talk show host Rush Limbaugh along with the millions of voters backing his campaign and his own media experience suggest that the potential for Trump-branded network is too lucrative an idea not to consider.

“Who could have possibly seen this one coming?” said Republican senator Ben Sasse of Nebraska, an avowed “Never Trumper”, in a sarcastic tweet in response to the news of Mr Kushner’s exploratory work.