Boston mayor with Connemara roots promises to visit next Spring 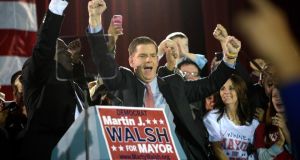 Bonfires are expected to be lit in Connemara next Spring when new mayor of Boston Marty Walsh fulfils a promise to visit the place he regards as a second “home”.

The commitment was given by Walsh on Raidió na Gaeltachta yesterday after his election, when he spoke a few words in Irish and paid tribute to more than 100 relatives, friends and supporters who had travelled across the Atlantic from his parents’ home parishes of Carna and Rosmuc.

The Massachusetts state congressman has close links with this part of the Atlantic seaboard, as a nephew of Boston building workers’ union leader Pat Walsh, nicknamed “The Legend”.

His late father John Walsh who also took a keen interest in union issues, was from Callowfeenish in Carna and his 71-year-old mother Mary O’Malley, who also spoke as Gaeilge on Raidió na Gaeltachta yesterday, is from Ros Cide in Ros Muc.

The family lived in Dorchester, a strong Irish enclave, and Marty was diagnosed with cancer at the age of seven and was given a poor prognosis. His mother describes his recovery as “miraculous”.

He worked on building sites, as his father had done, after high school, but became an alcoholic – something he has spoken about openly. He quit alcohol, moved to a clerical position in the builders’ union and ran for political office in 1997.

He was elected a Massachusetts state representative, and took a degree in social science in Boston College whille working full-time.

Independent Connemara councillor Seosamh Ó Cuaig said that the reception Walsh would get when he arrives home next Spring would be “akin to that for boxer Seán Mannion when he fought unsuccessfully for the world title in 1984”.

Walsh keeps in touch with his roots, is a patron of an emigrants’ centre project in Carna, and has also expressed support for a new road between Galway and Screebe.

“He is regarded as a man who survived many challenges, who has backed issues which are not popular – such as same-sex marriage in Massachusetts – and has an ability, as have many of his Irish supporters, that we could well do with a bit of back here,” Ó Cuaig said.