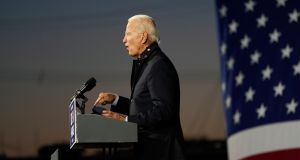 US presidential candidate Joe Biden has warned that a trade deal between the United States and Britain will not happen if the Belfast Agreement is undermined, in the latest intervention by the former vice-president on the issue of Ireland and Brexit.

A memo published by his campaign over the weekend outlined the Democratic candidate’s view on Ireland and Irish-America. It said if elected, Mr Biden would “support active US engagement to advance the Northern Ireland peace process” and ensure there was “no US-UK trade deal if the implementation of Brexit imperils the Good Friday agreement”.

It is the latest statement by Mr Biden on the contentious issue of Brexit and its impact on Northern Ireland. Last month he warned that a trade deal between Washington and London – a key priority of Brexit advocates in the run-up to the 2016 referendum on leaving the EU – would not happen if the Belfast Agreement was undermined.

“We can’t allow the Good Friday agreement that brought peace to Northern Ireland to become a casualty of Brexit. Any trade deal between the US and UK must be contingent upon respect for the Agreement and preventing the return of a hard border. Period,” he said at the time.

That followed a strong warning by House of Representatives speaker Nancy Pelosi and its ways and means committee chairman Richard Neal warning that Congress wouldnot endorse a trade deal if peace in Northern Ireland was jeopardised.

Mr Biden, whose ancestors emigrated to the United States in the mid-19 century from c Mayo and Louth, frequently draws attention to his Irish heritage, and his experience of growing up in a Catholic Irish-American community in Scranton, Pennsylvania.

In his latest policy position on Ireland and Irish-America, the presidential candidate also vowed to prioritise legislation to create a roadmap to citizenship for the 11 million undocumented people living in the United States “who have been strengthening our country for years”,including thousands of Irish-born citizens.

“Joe Biden rejects Donald Trump’s immigration policies and will restore America’s values as a nation of immigrants,” the statement said.

Ireland had endeavoured to secure E3 visas for Irish citizens – currently offered only to Australian nationals – to live and work in the US, but the efforts were blocked in the Senate.

Mr Biden’s campaign highlighted his record on Irish issues during his years in the Senate and as vice-president. “Joe Biden has a long history of support for the Irish people and peace in Northern Ireland including advancing human rights while also staunchly opposing terrorism,” the statement said.

“As one of the 30 million people who claim Irish ancestry, Joe came from a family that worked hard and dreamed of a better life for their children than the generation that came before them – the essence of the American dream.”

With the US presidential election now just over two weeks away, opinion polls show Mr Biden leading Donald Trump nationally and in key swing states that will determine the outcome.