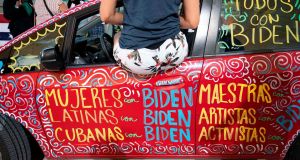 US president Donald Trump and his Democratic rival Joe Biden will take part in competing, televised “town hall” events on Thursday night following the cancellation of the second presidential debate.

The Commission on Presidential Debates last week cancelled the scheduled Miami debate when Mr Trump objected to a virtual format. After Mr Biden confirmed he would take part in an audience event with ABC in Philadelphia in lieu of the debate, NBC announced it would hold a “town hall” with Mr Trump in Miami.

The two prime-time events are likely to prompt a ratings stand-off between the candidates. It remains unclear if the final presidential debate, scheduled for next week in Nashville, will go ahead.

Mr Trump has insisted that he is immune from Covid-19 following his hospitalisation earlier this month, though it is still unclear when he may have first been infectious. He accused the debates commission, which is an independent body, of bowing to his opponent’s demands by suggesting a virtual event.

The president has embarked on an ambitious campaign programme, holding a series of rallies including an event in Iowa on Wednesday night, despite concerns about the spread of Covid-19 at the large-scale events that have seen thousands come together in close proximity to hear the president speak.

With polls showing Mr Biden ahead nationally and in key swing states, the Biden campaign dismissed a New York Post report claiming that Mr Biden’s son Hunter introduced a Ukrainian executive to his father while he was vice-president, citing previously unseen emails. A campaign spokesperson said: “Joe Biden carried out official US policy toward Ukraine and engaged in no wrongdoing.”

A Quinnipiac poll published on Wednesday showed Mr Biden ahead in the traditionally Republican state of Georgia by seven points. Mr Biden leads with 51 per cent support among likely voters, compared with 44 per cent for the incumbent. Mr Trump won the state by five points in 2016. The race is tied in Ohio, the poll found.

“This is the first time in American history that we’ve nominated a woman who is unashamedly pro-life and embraces her faith without apology,” he said, repeating his argument on Tuesday that she is a role model for conservative women.

Ms Barrett was also questioned on whether a president had the power to pardon himself or override a ruling of the supreme court. She evaded a direct answer, replying that, while “no man is above the law”, “as a matter of law, the supreme court may have the final word, but it lacks control about what happens after that”.

She added: “The supreme court cannot control whether or not the president obeys.”

Proceedings were suspended for a time in the afternoon due to a problem with Ms Barrett’s microphone. The committee is expected to vote on Ms Barrett’s nomination next week, before her confirmation is put to a full vote on the Senate floor.