Biden to visit Ireland this year 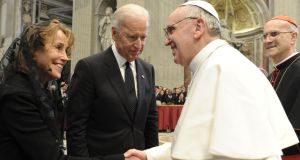 US vice-president Joe Biden and his wife Jill are greeted by Pope Francis in Saint Peter's Basilica after his inauguration at the Vatican yesterday. Mr Biden confirmed today that he will visit Ireland laster this year. Photograph: Reuters

US vice-president Joe Biden has confirmed he will visit Ireland later this year.

He made the announcement during a meeting with the Taoiseach Enda Kenny and his wife Fionnuala at Mr Biden's residence at the Naval Observatory in Washington for his traditional St Patrick's Day breakfast.

The Taoiseach said he was very pleased Mr Biden was coming to Ireland and added: “I hope that we will have a little round on the golf course.”

Mr Biden, who returned from the installation of Pope Francis in the Vatican last night, said: “Welcome to spring,” marking the first day of the new season as the Taoiseach and his wife arrived.

Mr Kenny and his wife posed for photographs on a sunny but cold morning as Mr Biden joked with the press assembled outside his Washington home.

Guests at the breakfast included Democratic senator Pat Leahy from Vermont and Vicki Kennedy, the widow of the late Massachusetts senator Ted Kennedy.