Florida, Texas and Arizona among those reporting daily records for new cases 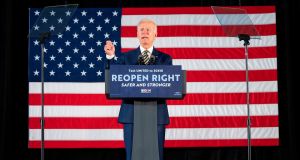 Democratic presidential candidate Joe Biden speaking in Darby, Pennsylvania. He said there was “no clear guidance from the federal government to what businesses need to do to reopen safely, efficiently and generate a strong recovery”. Photograph: Jim watson/AFP via Getty Images

Presidential candidate Joe Biden hit out at US president Donald Trump’s handling of the coronavirus pandemic as he lambasted the lack of guidance offered by the federal government as Covid-19 cases rise in some US states.

Speaking at a campaign event in Pennsylvania, Mr Biden said there was “no clear guidance from the federal government to what businesses need to do to reopen safely, efficiently and generate a strong recovery”.

Mr Biden accused Mr Trump of prioritising big business in the recent paycheque protection stimulus programme and of having insufficient testing in place.

“The pandemic is still here. It’s going to be here for the foreseeable future until we get it under control or until we get a safe and proven vaccine…we have to deal with it head-on. Tell the people the truth.”

He was speaking amid growing fear of a second wave of coronavirus cases in the US.

More than two million cases of coronavirus have been recorded in the US, while the deaths from Covid-19 is approaching 120,000, the highest in the world. However, several states have reported a rise in infections in recent weeks, sparking concern about a wave of new infections.

Although areas of the country which were initially hard hit, like New York and New Jersey, have witnessed a decline in deaths from Covid-19 in recent weeks, more than 20 states have seen a rise in cases.

Florida, Texas and Arizona were among those reporting daily records for new cases this week.

Florida reported 2,610 new cases on Wednesday – its second highest daily increase. It follows an increase of 2,783 cases on Tuesday. As a result Miami has delayed its phased reopening, although Florida’s governor, Ron DeSantis, said the rise in cases was due to increased testing.

The renewed focus on Covid-19 cases comes as Mr Trump prepares to return to the campaign trail this weekend with a rally in Tulsa, Oklahoma.

The Trump campaign has announced that those attending the event in an indoor arena will have their temperatures checked, while hand sanitiser and masks will also be available. Those attending are also required to sign a waiver agreeing they cannot sue if they contract Covid-19.

However, local officials have raised concerns about the decision to hold a rally in the city which has seen an increase in coronavirus cases in recent days.

A lawsuit taken by city residents and business owners to block Mr Trump from holding the election event was dismissed on Tuesday night, and the event is likely to go ahead.

Speaking at the White House on Wednesday, Mr Trump’s adviser Kellyanne Conway said the president was “very excited to get back on the road and connect directly with people”.

“People are going to go if they feel comfortable going,” she said of the Tulsa event. “We always tell people, here’s the guidance, feel comfortable, don’t feel uncomfortable. We also know that people don’t want to be locked down forever.”

Asked in an interview if he would personally choose to attend the rally, White House coronavirus expert Anthony Fauci replied: “Of course not.”

However, vice-president Mike Pence said the risk of a second wave was “overblown”.

“In recent days the media has taken to sounding the alarm bells over a ‘second wave’ of coronavirus infections. Such panic is overblown,” he wrote in the Wall Street Journal.