Forgetful Johnson evidences idea Covid-19 has slowed him down 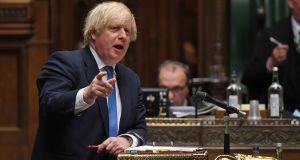 After a torrid few days climaxing in an embarrassing U-turn over extending free school meals through the summer, Boris Johnson might have expected an especially cruel going-over from his personal Torquemada, Labour leader Keir Starmer. At the start of their exchange at prime minister’s questions, it seemed to follow a familiar pattern with the Labour leader outlining a carefully argued case against the government’s record on child poverty.

Starmer stumbled, refusing four times to answer and making a feeble joke about the event turning into opposition questions, adding that he was ready to exchange places with the prime minister any time.

“A great ox has stood upon his tongue,” jeered Johnson, slipping back into his comfort zone as he quoted Aeschylus.

Social distancing rules mean that the prime minister has fewer than two dozen MPs behind him in the chamber but they made enough noise to make it clear that this was Johnson’s first win at PMQs since Starmer took over as Labour leader. The prime minister bumbled his way cheerfully through the rest of the session, failing to answer most of the questions, mangling facts and mistaking veteran Liberal Democrat Alistair Carmichael for a Scottish nationalist.

But some evidence of his party’s anxiety was on display as one Conservative MP after another congratulated the prime minister on how healthy and fit he appeared to be. The word at Westminster is that Johnson has not recovered from his illness with coronavirus and that he is distracted and forgetful.

He did nothing to calm such speculation at the Downing Street press conference on Tuesday when he said he had not heard about footballer Marcus Rashford’s campaign to extend free school meals until that morning. And the moment Johnson looked most rattled at PMQs was when Labour’s Tullip Siddiq taunted him about apparently breaking a promise he had made at the despatch box the previous week.

“Is this yet another U-turn, or has the prime minister just forgotten what he said in the chamber last week?” she said.

Johnson’s performance helped to make for fairly smooth sailing at a meeting with senior Conservative backbenchers later in the afternoon. But his MPs remain impatient about lifting the lockdown and getting children back to school and many worry that the prime minister who won them their seats last December has yet to regain a grip on the government he leads.