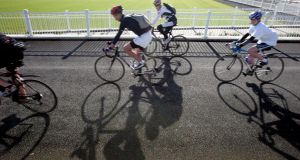 A segregated cycle route, from Blackrock to the Forty Foot bathing spot in Sandycove in south Dublin, is to be installed almost 20 years since it was first planned.

Dún Laoghaire-Rathdown County Council is to introduce a one-way system for cars along the coastal route to facilitate what it describes as a “dramatic and necessary shift to walking and cycling” during the coronavirus pandemic.

Work on the 3.6km route will start early next month and will take about three to four weeks to complete with certain phases of the temporary cycle route being opened earlier as works are completed, the council said.

The path will require the implementation of a one-way system for vehicles on Seapoint Avenue, Queen’s Road, Windsor Terrace and Marine Parade.

Traffic will no longer be able to access the harbour car park closest to the East Pier via Queen’s Road and instead access to this and other car parks within the harbour will be facilitated from the Queen’s Road/Marine Road junction and via Coal Quay Bridge.

There will be no change to the direction of flow of traffic or existing car parking arrangements on connecting roads between Seapoint Avenue and Monkstown Road and existing public transport, including bus routes and bus stops, will remain unaffected. The one-way measures “will not adversely impact traffic in the Sandycove and Glasthule area”, the council said.

The road network would not be able to support additional trips by car which could arise from a reduction in public transport capacity, and the plan is “in line with current Government public health advice where people are advised to walk or cycle if they can and to avoid using public transport unless they need to”, the council said.

There had already been large increases in the number of people walking in the area and pedestrians “are often faced with situations where there is not enough footway width to cater for the need to maintain 2m physical distancing, which can lead to people stepping off the footpath and potentially colliding with oncoming traffic”, the council said.

“In addition, the profile of cyclists typically using the road is changing with cyclists of all ages and abilities now using the county’s roads, streets and cycleways. The increase in numbers of pedestrians and cyclists, together with an increase in average vehicle speeds on our roads, and the absence of dedicated or segregated cycleways on particular routes may present a significant risk to these vulnerable road users.”

While the measures are described as temporary, the council said: “This is also an opportunity as a society to reflect on the use of public space and to possibly reimagine our use of, and relationship with, that space.”

In 2002, a continuous Dublin Bay cycle route called the S2S was proposed, to run along the seafront all the way from Sutton to Sandycove. While the northside section is largely completed, only short unconnected paths are in place on the southside.