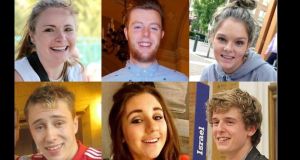 The students who were killed when the balcony collapsed at the Library Gardens Apartments, in Berkeley, California, in June: (top left to right) Ashley Donohoe, Eoghan Culligan, Olivia Burke, (bottom left to right) Nick Schuster, Eimear Walsh, and Lorcán Miller. 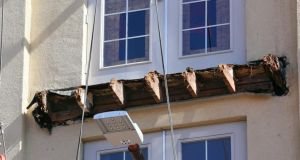 The broken wooden supports exposed after the collapse of a balcony on at the Library Gardens Apartments in Berkeley, California on June 16th, 2015. Photograph: Jim Wilson/The New York Times 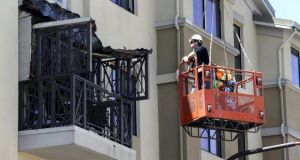 Workmen examine the damage at the scene at the Berkeley balcony collapse in California that killed six student and seriously injured seven others. Photograph: Elijah Nouvelage/Reuters

The parents of all students killed and injured in the Berkeley balcony collapse in June have filed legal actions in California.

Parents of the six students killed and the seven students injured in the tragedy are taking cases against 35 named defendants seeking punitive damages.

The cases are being taken against various property and construction-related firms associated with the apartment block where the collapse took place, including its owner BlackRock, builder Segue Construction and manager Greystar.

City of Berkeley inspectors said the balcony fell because the joists supporting the balcony had suffered severe dry rot due to water damage.

A criminal investigation into the collapse is ongoing.

One of the legal complaints, seen by The Irish Times, claims that the defendants “cut corners” and ignored signs of dry rot on the balcony, including “large mushrooms growing on its surface” years beforehand.

American lawyers representing their parents filed the legal proceedings in a California court on Thursday.

The students were killed when the balcony at apartment 405 in the Library Gardens apartment block on Kittredge Street in downtown Berkeley fell during a party to celebrate Ms Beary’s 21st birthday.

The Irish students, described in the legal complaints as “gifted, optimistic and high-achieving young people”, were working in Berkeley for the summer as part of the J-1 visa programme.

The growing mushrooms “represented an unambiguous ‘red flag’ warning that the wooden joists were rotting and that the balcony was at great risk of collapse”, the lawyers claim.

The families and the students claim BlackRock and Greystar failed to investigate, inspect or respond to complaints about water intrusion, wood rot, “fruiting bodies” and a tilt on the balcony.

The US lawyers for plaintiffs said their clients hope the litigation will “bring to light the negligence and carelessness that caused this entirely avoidable tragedy that has produced so much pain and loss, both here in and Ireland”.

Attorneys Michael Kelly, Richard Schoenberger and Matthew Davis said their clients hope that as a result of the disclosure of alleged wrongdoing through the cases, “appropriate industry, legislative and other responses will be undertaken to prevent similar tragedies from occurring in the future”.