Berkeley: Another emotional day as families prepare for return 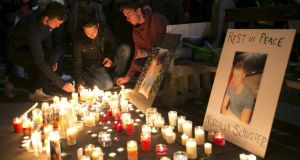 Men place candles at a memorial during a candlelight vigil for the victims of the Berkeley balcony collapse in California. Photograph: Elijah Nouvelage/Reuters

Another day, another emotional period for the families of the Irish students who died in Tuesday’s accident in Berkeley as they make final preparations for their difficult return home to Ireland.

As if the families didn’t have enough to deal with at this traumatic time, plans had to be reversed for an all-night vigil at St Columba’s Church in Oakland. The vigil had been intended to allow as many of the estimated 300 Irish J-1 students to pay their respects to four of the six killed in the tragic balcony collapse.

The arrival of President Barack Obama at San Francisco International Airport on Air Force One and all security and logistical complications which that causes at a commercial airport meant arrangements had to be made to get to the airport earlier than planned.

Otherwise the families and close friends returning home with the remains of Niccolai (Nick) Schuster, Eimear Walsh, Lorcán Miller and Eoghan Culligan might not get them to Saturday’s 5.20pm flight from San Francisco, which gets into Dublin at 11.30am on Sunday.

On Friday, friends of the four prepared photographs of the four students to be shown on the white walls around the altar at the vigil.

Much attention has focused on why some of the families had decided not to see the bodies of their loved ones as soon as possible after they landed on Tuesday and Wednesday. Bureaucracy at the Alameda County coroner’s mortuary, where the bodies were held, meant the families couldn’t see them there and they had to wait until the remains passed to undertakers.

Marie and Gerry Culligan, parents of Eoghan, and Jim and Patricia Walsh, parents of Eimear, decided to wait until Lorcán’s parents Kenneth and Sinéad Miller arrived, landing on Thursday on a flight from Dublin, before they went to the remains of their loved ones.

“That was their wish,” said Minister of State for the Diaspora Jimmy Deenihan. “And they waited for the Miller family to come over by plane on Friday before they went and saw all of the deceased together. That was the wishes of the families.”

Philip Grant, the Irish consul general in San Francisco, said the families wanted to create their own space where they could remember the students and also a space where the J-1 students could come.

There are an estimated 800 Irish students participating in the J-1 summer work programme in the San Francisco Bay Area, including about 300 in Berkeley. Given the outpouring of emotion this week by so many in the Irish student community, there was always going to be a big turnout for any commemoration service.

At a tearful ceremony on Thursday evening before the memorial near the scene of the accident, Mr Deenihan was filled with emotion when he spoke about what the families, friends and other J-1 students in the Bay Area had been through and the broken-hearted response of the Irish public back in Ireland.

Surrounded by the parents, siblings and close friends of Eoghan, Eimear and Lorcán, Mr Deenihan, who had just arrived in from Dublin, said the families had been through “a very traumatic time for the last three days and the sympathy of Ireland is with you”.

“I have never seen such an outpouring of genuine sympathy and grief from the whole country for the families of the bereaved,” he said. “The six who are dead have become the children of Ireland. They have now become symbols of our country and the people have responded accordingly in so many different ways.”

Helped by Gerry Culligan and Jim Walsh, Mr Deenihan laid a wreath at the memorial of flowers and notes of condolences near the scene of the accident at the Library Gardens student apartment block.

The wreath was laid just metres from where the six students - and another seven who are being treated in hospital - fell from the fourth-floor balcony while celebrating a friend’s birthday party.

Above that patch of footpath the seven wooden beams that once supported the balcony were even more exposed after the City of Berkeley ordered the removal of the balcony below on the third floor.

Mr Deenihan told The Irish Times there was a poignancy to laying the wreath so close to the scene of the accident.

“There are different levels of emotion here but the emotion of the fathers and mothers and the close relatives is really something that is very hard I suppose to understand.”

The Minister said he spent time with the different members of the families during the 11-hour flight from Ireland to San Francisco, speaking to them about the tragedy. “That helped me to cope emotionally with arriving here and dealing with this matter, and I am an emotional person myself,” he said.

The Kerry TD said that he was good friends with the late Peg Keane Schuster, the grandmother of Niccolai Schuster and sister of Co Kerry playwright John B Keane.

“Really when you know some of the families personally as well it is more of a challenge,” he said.

The difficulties of transporting so many back to Ireland after such a devastating tragedy could be seen by a request by the Irish Immigration Pastoral Centre, which made a public plea to passengers on the direct Aer Lingus flight from San Francisco to Dublin on Sunday to give up their seats to travel back to Ireland.

Mr Grant said these seats were for the student friends of the deceased so they could return to Ireland in advance of the funerals.

Those ceremonies will see the personal grief that has gripped Berkeley over the past five days transported 8,000 kilometres away to Dublin.