Neo-Nazis clash with protesters in Berlin on Hess anniversary 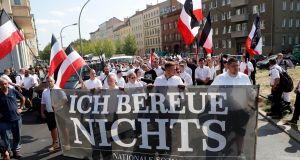 Far-right supporters hold a banner reading “I regret nothing” in a demonstration commemorating the death of Rudolf Hess. Photograph: EPA

At least one police officer was injured in Berlin on Saturday when about 500 activists shouting “Nazis out!” clashed with an equal number of far-right activists marking the 31st anniversary of the prison suicide of Nazi convict Rudolf Hess.

Many of the far-right activists, clad in red and white, hoisted the red, white and black flag of Hitler’s Third Reich. One group carried a sign that proclaimed, “I regret nothing: National Socialists Berlin.”

“There were reports of injuries when some stones and bottles were thrown by counterdemonstrators at the far-right demonstrators,” said Berlin police spokesman Thilo Cablitz. “At least one police officer was injured. But the event is still going on and we’re still compiling the numbers.”

About 2,300 police officers were on duty to prevent violence at the Berlin event and a separate march by less than 50 people in the Berlin suburb of Spandau, where Hess, a former deputy of Germany’s wartime dictator Adolf Hitler, served a life sentence handed down at the Nuremberg war crimes trials.

A broad mix of counterdemonstrators staged non-violent sit-ins at intersections along the march route in the Berlin neighbourhood of Lichtenberg. Others gathered to shout at the neo-Nazi protesters.

Germany has tough laws that ban use of Nazi symbols, such as the swastika flag. But the far right has grown stronger in recent years after the arrival of more than a million mostly Muslim migrants beginning in 2015.

While far-right activity remains a fringe phenomenon in Germany, it has been behind high-profile crimes. This is the case most recently when 10 murders were committed by the so-called National Socialist Underground whose sole surviving leader was sentenced to life in prison in July.