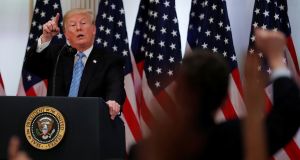 US president Donald Trump has said he is open to changing his mind about his pick for the US supreme court if there is compelling evidence of sexual misconduct against Judge Brett Kavanaugh.

Mr Trump praised Mr Kavanaugh at a news conference on Wednesday and said he believed the sexual misconduct accusations against his supreme court nominee were a “a con job”.

However, in answer to a question he said he could consider changing his mind on the nomination if evidence by accuser Christine Blasey Ford is totally convincing.

He said of the allegations, which Mr Kavanaugh denies, by her and others: “If I thought he was guilty of something like this ... yeah, sure.”

As with the allegations by two previous accusers, the latest incidents are alleged to have occurred decades ago.

In a sworn declaration, Julie Swetnick of Washington DC, said she witnessed Mr Kavanaugh “consistently engage in excessive drinking and inappropriate contact of a sexual nature with women in the early 1980s”. Her lawyer, Michael Avenatti, provided the declaration to the Senate judiciary committee.

Republican leaders indicated they were still determined to have the committee vote on recommending Kavanaugh on Friday — after a dramatic hearing on Thursday at which both Mr Kavanaugh and Ms Ford, are to give evidence.

A roll call presumably would follow next week by the full Senate, where Republicans hold a 51-49 majority.

Mr Kavanaugh would be likely to cement a conservative tilt to the supreme court for years to come, but that could be thrown into doubt if he cannot be confirmed before November elections that might swing Senate control to the Democrats.

Republicans, therefore, are anxious to get to the climactic vote, while Democrats insist there should be a time-out to investigate the women’s allegations. There are hints of Republican hesitancy.

Susan Collins of Maine, a pivotal moderate who has not announced her position, said she was taking Ms Swetnick’s claims seriously.

‘From the Twilight Zone’

“This is ridiculous and from the Twilight Zone. I don’t know who this is and this never happened,” he said.

Judiciary chairman Chuck Grassley tweeted that about 20 committee investigators are “tracking down all allegations/leads & talking to all witnesses & gathering all evidence”.

The committee also released a two-page prepared statement from Kavanaugh for Thursday’s hearing in which he “categorically and unequivocally” denied Ford’s allegation.

She has said he forced her into a room at a high school party, held her on a bed and tried removing her clothes as he muffled her mouth with his hands. Ford says she eventually escaped.

Kavanaugh’s written evidence for the committee went a bit further than the description of his youthful behaviour he gave in a Fox News Channel interview on Monday, when he said “people” may have drunk too much at high school parties.

“I drank beer with my friends, usually on weekends. Sometimes I had too many. In retrospect, I said and did things in high school that make me cringe now,” Kavanaugh said.

He also provided the committee with detailed calendar pages listing in green-and-white squares the activities that filled his summer of 1982 when he was 17 years old — exams, movies, sports and plenty of parties.

That is the year when Ford says she believes the assault occurred.

The May to August pages mention several parties at various houses and also a beach week, highlighted in all caps, the week after Kavanaugh’s exams. Nothing on the calendar appears to mention Ford, who has said she was a “friendly acquaintance” of Kavanaugh’s at the time.

Ford’s lawyers sent the judiciary committee a report on an August 8th lie-detector test she took on her allegations that states her answers were “not indicative of deception”.