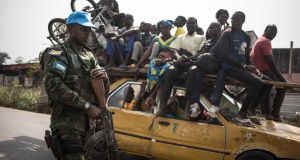 Violence has escalated since rebel groups that control two-thirds of the mineral-rich country launched an offensive in the run-up to December 27th presidential elections. Photograph: Florent Vergnes/AFP via Getty Images

Central African Republic (CAR) troops backed by Russian paramilitaries and Rwandan troops have killed 44 rebels who were part of a plot to mount an assault on the capital Bangui in an effort to overthrow the country’s newly re-elected president.

The government announced on Monday night that soldiers along with “allied forces” had attacked Boyali village, about 56 miles from Bangui, killing 44 rebels including mercenaries from Chad and Sudan.

It is the latest flashpoint in violence that has escalated since rebel groups that control two-thirds of the mineral-rich country launched an offensive in the run-up to December 27th presidential elections.

Opposition parties and rebel groups have disputed the validity of President Faustin Touadéra’s victory in December, while he has accused one of his predecessors, François Bozizé, of fomenting a coup, which he has denied.

Moscow has long seen CAR as a way to increase its presence in central Africa and boost global influence and when the government refers to “allied forces” they mean “Russia and Rwanda – always”, said Hans De Marie Heungoup, of the International Crisis Group.

Armed groups have grown in influence since most of the country’s rebel groups signed a Russia-brokered peace deal two years ago, despite the presence of a 13,000-troop UN peacekeeping mission.

This latest attack comes ahead of legislative elections scheduled for February 7th. Monday’s assault followed a series of small victories for the government in recent days, in which troops captured villages near Bangui where rebels had set up in an effort to, as the UN put it, “strangle” the capital.

“One could now say that the government is no longer on the back foot or the defensive position and has launched an offensive,” said Mr Heungoup. “This is not to say they are winning already, but it shows they are kind of reversing the trend and pushing the rebels to their back foot now.”

The government has been more aggressive since beating back a brazen rebel assault on Bangui on January 13th. They will hope to maintain their momentum so that they can secure next month’s legislative elections, according to Mr Heungoup.

Russia has cultivated Mr Touadéra as an ally through arms deals and the Wagner Group, the Kremlin-connected firm whose mercenaries train local troops and protect the president. Mr Touadéra’s national security adviser is a former Russian spy.

Moscow is seen as using CAR as a back door into bigger, more resource-rich economies nearby including Cameroon and Congo-Brazzaville.

Rwanda has also sought to form greater ties with CAR. In October 2019, the two countries signed defence and economic agreements that would give Rwanda greater access to CAR’s mining sector and give CAR support from Rwandan troops, which include 1,800 peacekeepers and several hundred sent separately just before December’s election at the request of Mr Touadéra. – Copyright The Financial Times Limited 2021