US and Russia disagree over G20 talks on election meddling 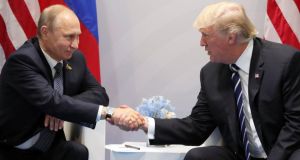 Russian president Vladimir Putin and US president Donald Trump meet on Friday on the sidelines of the G20 summit in Hamburg. Photograph: Michael Klimentyev/EPA

Russian president Vladimir Putin used his first meeting with US president Donald Trump to deny any interference in the last year’s US election. Their two-hour meeting took place on the sidelines of the Group of 20 meeting in Hamburg, ahead of expected all-night wrangling with the US over a statement backing global trade.

After a 30-minute meeting that ran to over two hours, Russian and US foreign ministers gave different version of what US officials called a “lengthy and robust exchange”.

Russian foreign minister Sergei Lavrov said the US president agreed there was no evidence of Russian election interference and accepted Mr Putin’s denial of involvement. This claim was quickly disputed by the White House. US secretary of state Rex Tillerson said the two sides had “intractable” positions on the matter.

Ahead of their talks, with journalists in the room, Mr Trump told Mr Putin: “We look forward to a lot of very positive things happening . . . It is an honour to be with you.”

Seated alongside their respective foreign ministers and two interpreters, Mr Putin said he hoped the meeting would “yield positive results”.

Over two hours later, Mr Putin said they had discussed “Ukraine, Syria and other bilateral problems”.

According to US officials, Washington and Moscow agreed a de-escalation plan for Syria, including a limited no-fly zone from Sunday at noon. The US has also appointed Kurt Volker, a former US ambassador to Nato, as special envoy to Ukraine.

The Hamburg talks wrap up today after a week of high security and days of anti-G20 demonstrations, including violent clashes, smashed shop windows and burning cars over the last two nights.

As police reinforcements were rushed into Hamburg from around Germany, one officer was hospitalised with a fractured skull while another plain-clothes officer fired a warning shot after being “massively attacked” by protestors, Hamburg police said.

Earlier in the day, protestors blocked routes to the G20 summit in Hamburg’s city-centre trade fair, causing delays to the programme for partners of G20 leaders.

US first lady Melania Trump was unable to leave her accommodation for a time, her spokesperson told Germany’s DPA news agency.

Particularly awkward, according to Berlin officials, are passages backing free trade, given the Trump administration’s opposition to trade deals it sees as detrimental to US interests.

The German leader is torn between diluting summit conclusions in the interests of unity, or isolating the US to stand by key pledges on the climate and free trade ahead of her September re-election bid.

1 Quarantine process to be tightened as health officials grow nervous
2 US passengers fly into Dublin: ‘I’m here for six days. I guess I’ll have to stay inside’
3 Back with our old friends at eir – and nothing seems to have changed
4 White House turns its fire on Anthony Fauci over Covid-19 comments
5 ‘I thought it was a hoax’: Patient dies after Texas Covid party
Real news has value SUBSCRIBE