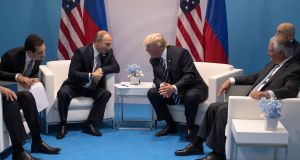 Donald Trump during a meeting with Vladimir Putin at the G-20 summit in Hamburg, on Friday. At right is US secretary of state Rex Tillerson. Photograph: Stephen Crowley/The New York Times

US and Russian officials have given competing versions of the first “lengthy and robust” meeting between US president Donald Trump and Russian president Vladimir Putin.

Despite “positive chemistry”, US secretary of state Rex Tillerson said Mr Trump pressed the Russian leader “more than once” on claims that Moscow interfered in the 2016 presidential election. His Russian counterpart Sergej Lavrov said the US president accepted denials of interference from Mr Putin.

Though the US-Russian meeting took place on the sidelines of the G20 meeting in Hamburg, it turned into the main event on Friday – particularly after talks ran four times longer than scheduled, to more than two hours.

“We have had some very good talks, we will have a talk now and obviously that will continue,” said Mr Trump ahead of their meeting, seated beside the smiling Russian leader. “We look forward to a lot of very positive things happening ... it is an honour to be with you.”

Ahead of the highly-anticipated meeting, also attended by Russian and US foreign ministers and two interpreters, Mr Putin said: “I am delighted to be able to meet you personally, Mr President, and I hope our meeting will yield positive results.”

“We spoke over the phone but phone conversation are never enough,” he said. “We returned to the problems of fighting terrorism and cybersecurity.”

Afterwards the US and Russian foreign ministers gave very different accounts of their discussion on alleged Kremlin interference in the US election. According to Mr Lavrov, the US president criticised the “strange...campaign” over alleged Russian hacking, given a lack of proof.

The Russian foreign minister suggested Mr Trump accepted Mr Putin’s insistence that Moscow did not interfere. His US counterpart Rex Tillerson said that, given “intractable positions” on the question of election interference, it was not clear whether the two countries would be able to agree on a resolution. He said a working group would be set up to establish a framework agreement to outlaw cybercrime and non-interference in elections.

On Thursday in Warsaw, Mr Trump said he believed it was likely that Russia – but also other countries – was involved in efforts to swing the 2016 presidential election result.

Ahead of their meeting he also hit out at Russia’s “destabilising activities” in Ukraine, claims the Kremlin denies.

It was not immediately clear if Ukraine was raised at the Friday meeting, though the two leaders also discussed efforts to resolve the six-year Syrian civil war which has claimed up to 470,000 lives and forced millions to flee. The two leaders agreed a “de-escalation agreement” to establish a no-fly-zone in southwest Syria to come into effect on Sunday at noon.

Mr Tillerson described the initiative as the “first indication of the US and Russia being able to work together in Syria” since taking opposing sides in the conflict.

Earlier, summit host Angela Merkel, the German chancellor, urged leaders to hold open, conciliatory talks to “allay the fears and anxieties” of people around the world following the G20 talks.

“Pressing solutions can only be found if we are ready to compromise and accommodate others’ views without bending over backwards too much and giving up our principles,” said Dr Merkel. “We can also say where we differ.”

After a morning session discussing terrorism, and an afternoon discussion on climate and energy, leaders had a working lunch to debate global trade issues. Dr Merkel said there was widespread concern among G20 participants about the threat posed by North Korea’s recent missile tests. “All pointed to the particular role of the UN security council in this,” she said. “We hope together that the security council can find an appropriate answer to this latest breach of its resolution.”

With no agreement yet among leaders or their negotiators on the key trade issue, senior EU officials warned that they were prepared for all eventualities in Hamburg, including any US protectionist measures on imports.

Amid signals that the US may use the G20 meeting to announce tariffs on steel imports, European Commission president Jean-Claude Juncker warned that the EU could react “within a few days”.

”We hope counter measures are not required ... but we are in a fighting mood,” said Mr Jean-Claude Juncker, president of the European Commission. European Council president Donald Tusk, who also attending talks, said that failure to agree robust measures to curb migration and human trafficking would be “proof of the hypocrisy of some G20 members”.

Mr Tusk welcomed “surprisingly promising” words from the US president on transatlantic co-operation in a Warsaw. “We have been waiting a long time to hear these words,” he said. “The real question is whether it was a one-time incidence or a new policy.”