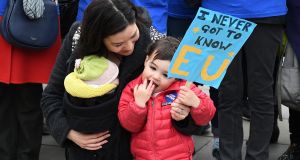 Protesters from the pro-EU group Open Britain outside of the Houses of Parliament in London on Wednesday. Photograph: Justin Tallis/AFP/Getty Images

It may be impossible to reach. But when British and EU negotiators start Brexit talks, they will be eyeing something every tough negotiation needs to be successful: a landing zone.

Over the past months the work of convergence has quietly begun. The two sides have sometimes been ambiguous on sensitive issues – transition terms, legal jurisdiction and financial obligations. Both are gently making space for a deal by 2019. The question is whether their respective visions overlap or are irreconcilable.

“Trade negotiations always start with people making pious and pro-free trading comments, usually on both sides of the table,” Sir Ivan Rogers, Britain’s former EU ambassador, recently told MPs. “They usually end up in a fairly mercantilist fist-fight, but most of them resolve themselves and end up with trade deals – not all, by any means.”

One senior EU figure warns there is a more than 50 per cent chance talks could fall through. Their complexity limits what is practical within a tight deadline. Many officials on both sides see Britain’s exit as one stage in a far longer negotiation. But a deal is possible.

So what might Brexit look like in April 2019? To address that question we have drawn on conversations with more than a dozen politicians and officials closely involved in the preparations.

A full exit deal will require at least three documents: an article 50 withdrawal agreement, covering the terms of disentanglement; an annex explaining transition provisions; and a political agreement on a framework for future relations.

Some big political compromises are essential for an ambitious 2019 deal. It may prove fiendishly hard or simply impossible to complete it all.

“Two years is unfeasible,” said one senior EU figure closely involved in Brexit, highlighting what many officials see as the need for a transitional accord. “The more you learn the more you bump into the complications and legal problems.”

Britain and the EU must untangle the past, settling outstanding financial liabilities and the rights of migrants in Britain and the continent. Both are tall orders. An outline for a future relationship is essential, framing future trade ties and underpinning any transition arrangements.

Another condition for a soft landing is a political deal to clarify the role of European courts, and to assure the EU of a level playing field after Brexit in areas such as competition, state aid and product standards and market rules.

Provided there is no precipitous breakdown in talks, both sides acknowledge some basic exit terms are possible, especially covering trade in goods.

There is relative consensus on the need to prolong Britain’s place in the EU’s customs union. Negotiators mention a transition period of two to three years, simply to give time to introduce new systems, hire staff and establish a new customs border. This willingness to take more time is reinforced by the acute sensitivity over the Northern Ireland border – which will become the UK’s new frontier with the EU.

Should the customs union transition end before a trade deal is complete, a zero-tariff arrangement covering goods could also be feasible. Both sides would agree not to raise tariffs while a final free-trade deal is completed, reaching common understanding on complex rules of origin, and evolving product standards. The trouble for London is that opening its goods market will give it less leverage in trade talks.

“Roughly 60-70 per cent of the current economic relationship – just about everything that concerns trade in goods – is perfectly do-able within the next two years,” said Morgens Peter Carl, the former head of the EU’s trade department.

One of the biggest challenges is posed by highly regulated sectors in Europe’s single market, ranging from to medicines and aviation to the nuclear sector. Negotiators must not only grapple with market access, but what happens to the common rule book and the EU regime that enforced them.

Even if an EU-UK trade deal is agreed by 2019, officials in Whitehall believe Britain will not have standalone supervisory bodies ready in time to replace EU functions. Similarly, the EU side has neither the time nor the will to change its own regime – a new court or arbitration system for instance – to allow for a bespoke Brexit transition that may last as little as one to three years.

“There are limits to the creativity in this,” said one of the principal figures on the EU-27 side. “We’re stuck with certain things. There is no time... We won’t invent new schemes.”

Mr Carl sees the simple answer as “a continuation clause” that prolongs existing rights and obligations for a limited period. Negotiators consider one to two years as providing time for the private sector to prepare for a changed relationship. “Time has often been a friend of negotiators. Many problems have a tendency to disappear over time ... transitional periods have saved many a negotiation,” he wrote for Friends of Europe, a Brussels-based think-tank.

Under such a solution, Britain would maintain relevant EU ties for a few years after 2019 – although it would no longer have a voice within the bloc – as well as follow EU supervisory agencies where needed. Additional UK budget contributions could also be required.

The hard question will be how the EU will have confidence its laws are properly adopted and applied, even when those rules change. In a recent paper, Jean-Claude Piris, the EU’s former top lawyer, argued that continued participation in the single market during a transition would involve “accepting all its aspects”, including the European Court of Justice and free movement.

One way round such issues could be sector by sector transition deals, if talks on a future trade relationship make progress. But the EU-27 are taking a hard line on services, especially financial services.

Laurence Boone, chief economist of the Axa group and a former adviser to the French president, said services would be the “most problematic” area. “I fail to see how we can have any other type of agreements than the UK accepting the EU rules and supervision for accessing the EU single market on services. “

Existing EU trade deals are universally unambitious in this area. And EU negotiators want Britain’s service sector to execute a different kind of transition: relocating to the EU-27.

Difficult politics and the legal complexity of Brexit may scupper a deal. Each side is preparing for that eventuality.

“The UK’s negotiating hand is by definition weak,” said Alex Stubb, the former premier of Finland and a strong anglophile. “All the EU has to decide is the bill and the time of exit. The rest is altruism.”

If a wide-ranging deal does prove impossible, both will make arrangements of their own. For the EU, that could mean guaranteeing UK citizens certain rights within the bloc, or grandfathering rights for banks gradually moving operations to the continent.

For the UK, it may mean relaxing customs clearance checks or unilaterally recognising certain EU rules or certificates. Trade would be managed on World Trade Organisation terms. Britain would scramble to reach regulatory agreements to keep aeroplanes flying and an accessible supply of nuclear fuel and spare parts for reactors.

Both sides see the risks of a Brexit crash as sobering. But even with goodwill to agree a sensible deal, Eric White, a former EU commission lawyer now at Herbert Smith Freehills, argues the negotiators may ultimately choke on the details.

“It will be an enormous challenge to resolve the innumerable technical but important issues that will arise in this negotiation involving so many different interests before the two-year guillotine falls,” he said. “The utmost vigilance is called for during these negotiations to avoid mistakes.”

1. The exit bill and trade: Michel Barnier, the EU’s lead negotiator, wants “divorce-first” negotiations, delaying talks on trade until Britain has agreed principles on an exit bill of up to €60 billion. However the UK, eager to conclude a trade deal, wants the talks to proceed in parallel.

2. Migrants’ rights: The fate of three million EU expats in Britain and one million UK migrants in the rest of the bloc is another huge issue Barnier wants resolved before trade talks begin. But though both sides want a reciprocal deal the issue is fiendishly complex.

3. Transition:Britain wants to avoid a cliff edge – a sudden break with the EU. But the bloc insists that a transition period requires accepting the free movement of people and continued compliance with the rulings of the European Court of Justice.

4. European courts: This puts the two sides on a collision course, since prime minister Theresa May has vowed the UK will establish immigration controls and end the sway of the ECJ as soon as Brexit takes place.