Does Brexit really pose a threat to business in Northern Ireland? 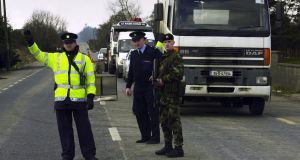 “The British and Irish governments, the politicians, and the people have said they don’t want a hard Border. So if nobody wants a hard Border, who’s going to impose it?” Photograph: Frank Miller

George Fleming’s family firm, which makes farmyard machinery, was founded in Donegal in Victorian times, but today it operates from a factory just outside Derry.

“Who’s going to be badly affected by Brexit? Everybody in my phone book,” says Fleming, chairman of both Fleming Agri-Products and the Derry Chamber of Commerce. The self-described “member of the Protestant community and a unionist with a small u” lived in Donegal until he was 30 and voted Remain last July.

“There are 325,000 Border crossings a week in the northwest, and that’s just at the three main crossing points,” he says. “I do about 35 per cent of my business in the Republic, and 20 per cent of my employees live across the Border.

“Unfortunately, I’m old enough to remember the hard Border in times gone by, and I know about the implications in terms of delays. Lorries could sit at customs for two hours – and, with today’s driving legislation, that would be 25 per cent of that driver’s working day gone. It would make living unbearable on both sides of the Border.”

Opinion within the Protestant community differs. Robert Moore, an arable and grass farmer in Ballougry, lives and works within sight of the Border and has voted for unionist and nationalist candidates in the past. Last year he voted Leave, and says he’s “not overly concerned about what the media have termed a ‘hard Border’.

“The British and Irish governments, the politicians, and the people have said they don’t want a hard Border. So if nobody wants a hard Border, who’s going to impose it? If it’s the EU, why would the EU do something that would cause so much damage to the Republic of Ireland, which has been loyal to it for so long?”

Technology will “smooth” any Border problems, Moore says. “There is already a paper trail, so for example when I go across the border to buy cattle there is an administrative paper trail. The system at the moment is actually very straightforward, so if there is a tariff system it would just be an extension of that.”

Irwin Armstrong, who heads Ciga Healthcare, a medical testing company that exports worldwide from Ballymena, Co Antrim, campaigned for a Leave vote and dismisses talk of a hard Border as “scaremongering”.

“A lot of people don’t realise that the movement of goods is usually done by haulage companies who file contents lists anyway, and all declarations are currently done online. When the lorry crosses the Border, camera technology will read the number plate. If the lorry isn’t registered the technology will pick it up and it’s very easy to stop it at the Border.”

For many, the prospect of a return to any type of controlled Border feels like a retrograde step. For Fleming, it is a potentially dangerous one.

“For the last 20 years, we have had no physical, visible Border,” he says. “We’ve worked very hard at getting peace, especially here in the northwest, and I’d be concerned that younger members of the dissident republican element will think that now’s their chance because somebody’s put a division in this country again.

“I’m fairly adamant that we will have trouble if there is a Border put in place in this country. Even if it’s the EU that puts up the customs posts, they will get blown up.

“I’m old enough to remember going to school and seeing a man lying with his hands tied behind his back and a hood over his head out by the Border at Ballougry,” Fleming says. “No child should have to see that. I hope for the best but fear the worst, because I know what the worst is.”

“In Northern Ireland, we cannot afford anything resembling a Border because of the peace process,” he says. “We’ve got to a relatively peaceful place, with very little agitation – certainly nothing like there was. We can’t go back to that.”

Taylor, who is Northern Ireland co-ordinator of Farmers for Action, says many farmers have been forced into bankruptcy by EU subsidies. The greatest challenge facing the farming industry is not Brexit but the need to be paid properly for their produce.

“Whether we voted in or out, farmers still face the same enemy, which are the big corporates. Subsidies do not work. If farmers could be properly paid for what we produce, we wouldn’t need subsidies. “

Taylor suggests that Northern Ireland could become an associate member of the EU, much like the Isle of Man, which gains access to the EU common market through the UK’s membership. However, it does not contribute to, or receive anything from, EU funds.

Armstrong, meanwhile, predicts Ireland will be out of the EU within five years.

“I think the euro is going to collapse – in fact, the EU may well collapse,” he says. “I think Brexit is the best thing that’s happened to the UK and Northern Ireland, as long as we’re prepared to take advantage of what’s been presented to us.

“There’s a big world out there and we’re now free to take part in it.”