Britain's newly appointed Foreign Minister Boris Johnson says he is humbled and proud to be offered the job. Video: Reuters 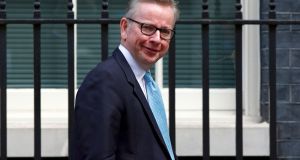 Michael Gove, who destroyed his own reputation during his bungled, treacherous attempt to seize the Tory crown, was sacked along with George Osborne and Oliver Letwin. Photograph: Neil Hall/Reuters

Nobody doubted that Theresa May would move quickly to put her stamp on the government she inherited from David Cameron, but the scale and brutality of her cabinet reshuffle has left Westminster reeling.

Her cull of Cameron’s most senior lieutenants was especially impressive, sacking his two closest allies, George Osborne and Oliver Letwin, in short order.

Michael Gove, who destroyed his own reputation during his bungled, treacherous attempt to seize the Tory crown, was sacked too, removing all traces of the once-dominant Notting Hill set from cabinet.

There were other sackings and resignations too, but the evisceration of the smart metropolitans who formed the heart of Cameron’s coterie was the most striking break with the past.

May’s decision to put David Davis in charge of the Brexit negotiations and to give Liam Fox international trade place the responsibility for securing a bright future for Britain outside the EU firmly in the laps of the Brexiteers. And there is a nice irony in promoting her vanquished rival Andrea Leadsom to the cabinet, only to lumber her with the task of telling farmers how their EU subsidies will be replaced.

The appointment of true blue Brexiteers to key positions will still any backbench rebellion from that quarter for some time. And the former Cameroons now consigned to the backbenches are too shell-shocked and divided among themselves to mount a serious challenge to her. By making Boris Johnson foreign secretary, May has ensured that the most dangerous pretender to her throne will be flying around the world rather than schmoozing in the tea room at Westminster.

May’s reshuffle marks a clean break from the liberalism of the Cameron years and her chancellor, Philip Hammond, made clear yesterday that there is a new economic policy. Osborne’s deficit targets have been abandoned, and with them the necessity for the austerity that has left Britain so divided.

When May said outside 10 Downing Street on Wednesday that many at Westminster did not understand how difficult life is for people struggling with insecure employment and poor public services, she was addressing voters who backed Brexit.

She has made clear that she believes in an interventionist role for the state and that her policies will not be guided by the liberal economic principles of recent years.

If May can persuade some of those who backed Brexit as a protest vote that her government is more in touch than that of her gilded predecessor, she could take some pressure off the EU negotiations.

In her initial calls to Angela Merkel and François Hollande, May said she needed time to prepare for formal article 50 exit talks but she made clear that Britain is definitely leaving the EU.

She can leave the preliminary stages to the twin apostles of Brexit, Davis and Fox. In the end, however, major EU negotiations are conducted between EU leaders rather than their subordinates and the responsibility for finding the best terms for Britain’s departure will ultimately return to May herself.

Securing a good deal from other EU countries is part of that but so too is cultivating a political atmosphere in Britain where a compromise in the national interest can win popular support.

The new prime minister has made a bold start, but as the Bank of England made clear on Thursday, there are rough economic waters ahead.

And if May is unable to keep her promises of combating economic injustice, limiting immigration and getting a good deal from the EU, some of the bloody corpses she has left around Westminster could yet start twitching.