Brexit latest: Meeting this week might indicate it is too early to quit on current talks 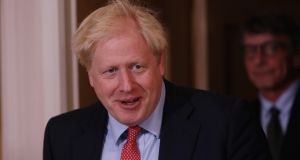 British prime minister Boris Johnson arrives for a meeting with David Sassoli, president of the European Parliament, at No 10 Downing Street in London. Photograph: Chris Ratcliffe/Bloomberg

The news that Boris Johnson and Leo Varadkar will meet later this week came at the end of a tumultuous 24 hours during which the Brexit talks appeared to be on the verge of collapse. Johnson and Varadkar spoke for 45 minutes in what a Downing Street source described as a “pretty constructive” conversation.

That description was in marked contrast to the account given by a different No 10 source of the prime minister’s 30-minute conversation with Angela Merkel earlier in the day.

According to that account, the German chancellor adopted such an unbending position on the need for Northern Ireland to remain in the EU customs union that it made a deal “essentially impossible not just now, but ever”.

On Monday night, the Spectator’s political editor James Forsyth published a lengthy message from a senior Downing Street source describing the state of the negotiations. The source predicted that the talks would end this week because the Taoiseach no longer wanted to negotiate.

“Since the Benn Act passed he has gone very cold and in the last week the official channels and the back channels have also gone cold. Varadkar has also gone back on his commitments – he said if we moved on manufactured goods then he would also move, but instead he just attacked us publicly,” the source said.

Varadkar believed that if there was no deal this month, a British general election will be followed either by a second referendum or by a re-elected Johnson agreeing to take up the talks from where they left off, the source added. Instead, the Conservatives would win an election on the promise of a no-deal Brexit, which it would pursue.

One source on the other side of the negotiations dismissed the prediction as a revenge fantasy, “a cross between Lord of the Flies, Texas Chain Saw Massacre and I spit on Your Grave. Sad”.

So what has changed to persuade Johnson and Varadkar that there is sufficient prospect of a deal to justify a meeting later this week? It could be that neither side is willing to concede victory in the blame game and that nobody wishes to be the first to pull the plug on the talks.

Or it might be that it is simply too early to throw in the towel on the current round of talks. EU sources pointed out on Tuesday that Merkel’s reported statement that Northern Ireland must remain in the customs union is not the EU’s agreed position. So despite the doom-laden predictions from Downing Street sources, there could yet be a compromise to be found.