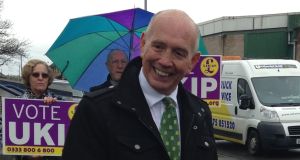 Former Conservative MP Bob Spink, who defected to Ukip and became its first MP, has been charged with electoral fraud.

The 68-year-old has been charged alongside a second man, 38-year-old James Parkin, over allegations that they submitted false signatures on Ukip nomination papers.

The accusations relate to the local election for Castle Point Borough Council in south Essex, England in 2016.

Essex Police said Mr Spink has been charged with five counts of submitting false signatures on nomination papers on or before April 5th, 2016.

Mr Parkin has been charged with nine counts of submitting false signatures on nomination papers on or before April 5th, 2016.

Four of the charges related specifically to false signatures while the remaining five related to obtaining genuine signatures by misleading electors about what they were signing for.

Both men will appear at Ipswich Magistrates’ Court on April 25th.