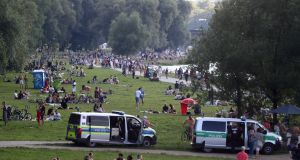 Every Thursday at 8pm during their lockdown, millions of Germans didn’t go outside their doors to clap for their health service. There were a few well-meaning attempts to replicate the UK’s NHS clapping phenomenon, but it never took off. Germans know that public clapping is no substitute for sustainable healthcare funding, nor is peer pressure a cure for Covid-19.

In the last weeks, as I left Berlin for the first time since February, how Germany has fared to date in the pandemic was the common thread of conversation as I visited friends, north and south.

There was no shortage of people to talk to about it on the trains, too: with foreign holidays discouraged, if not banned, more Germans than ever are holidaying at home – a new experience for many.

“A holiday in Germany instead of Majorca is better than no holiday at all,” said Jens, a 38-year-old father as we slipped out of Berlin and zipped through the flat Brandenburg countryside towards Hamburg.

Like me, Jens was heading with his wife and daughter to the northerly, coastal state of Schleswig-Holstein, one of Germany’s two biggest holiday destinations, which is enjoying a holiday season like no other.

Staying in a sleepy village of thatched cottages and whispering corn fields, a local friend described how, in the hours after Germany’s inter-state travel ban was lifted, his holiday cottages were booked out until the autumn. There are some new regulations – the cleaning between guests now requires disinfection of everything – but otherwise the season, my friend said, is progressing relatively normally.

“For many Germans,” he said, “I think summer is a bit like the carnival season: a break from life’s everyday rules.”

That became clear back in Berlin on a quick pit-stop. I met up with a Dublin friend over here for a summer job just as images emerged of crowds outside pubs on Dame Lane. There was something surreal, he said, to follow the debate in Dublin on his phone while sitting in a bustling Berlin beer garden.

There are some new health regulations here, too – disinfect your hands on arrival, add your contacts to a sheet – but the only noticeable differences are the reduced numbers of tables and lack of foreign visitors. My friend said people in Dublin were still crossing the street to avoid each other and denouncing each other online.

By contrast, the next evening in Berlin, he visited a rave in a city park. Has the virus transformed the Irish into a nation of rule-followers, he wondered, while the Germans had discovered their inner rebel?

Amid the sea of face masks on my holiday train journeys, I was always sure to encounter a few who believe the rule is for others. On one trip, a woman opposite me made her croissant last half an hour before, when challenged by other passengers, she put on her mask with a sighed “If you insist”.

Another woman, seated beside me on the train south to Bavaria, decided to have a long phone conversation without her mask on. I moved to the other end of the carriage.

Over dinner with friends near the Bavarian city of Landsberg, I steered the conversation to how well the country had coped with the virus to date.

Other countries that Germans look up to – primarily the UK and Sweden – are having a disastrous time. Five times more people have died in the UK, a country with one-third fewer people, than in Germany; and if Germany had Sweden’s death rate, there would be 45,000 people dead, and not 9,000.

Even though these are early days, and luck played a part, it has been fascinating to watch Germans struggle to accept that they have done well. Like so often, the war plays a part. Their 20th-century history makes it a struggle, one Bavarian friend said, to think of anything positive in nationalist terms. Here, many have been taught that after nationalist pride comes the fall.

“Perhaps it’s a weakness of our country not to realise how it’s no accident that we have a good health system, strong science and rational politicians,” said my Bavarian friend. “I am proud of all of that. But if you want me to go out and say I’m proud of all that being German, try coming back in 2120.”

As I drank a beer on the bank of Munich’s Isar river, watching teens swimming in the turquoise water, summer 2020 looked next to normal. But, even as Germany takes a pandemic holiday, it’s possible we’re still in the phoney-war phase of the Covid-19 crisis.

“The systems here are so strong that many have been able to ignore the pandemic, particularly in the summer,” said a British friend back in Berlin. “People may agree to go back to the Covid rulebook after their holiday. If not, the autumn could bring a rude awakening – even for Germany.”