Thousands of people in London and across the UK protested on Saturday against Prime Minister Boris Johnson's decision to suspend parliament for about a month before the deadline for the country to leave the European Union. Video: Reuters 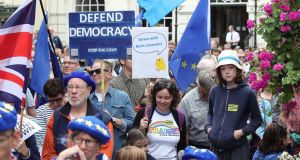 Tens of thousands of demonstrators are taking to the streets across Britain and outside the gates of Downing Street this afternoon in protest against prime minister Boris Johnson’s move to suspend parliament in the run up to Brexit.

Crowds brandished banners pledging to “defend democracy”, chanted “stop the coup” and waved EU flags in London in a bid to resist the parliament shutdown.

Demonstrators are also massing at protests in dozens of locations around the country including Manchester, Glasgow, Birmingham, Brighton, Swansea, Bristol and Liverpool.

One Facebook group for the capital’s protest event, called: “Stop the coup, defend democracy”, said: “Boris Johnson is trying to shut down our democracy so that he can deliver on his Brexit agenda. We can’t just rely on the courts or parliamentary process to save the day. We all have a duty to stand up and be counted.”

Organisers have backed the use of peaceful civil disobedience at the protests. It comes after critics have accused the prime minister of trying to circumvent parliamentary democracy to stop MPs blocking a no-deal Brexit.

The protests are being organised by a series of groups including Momentum, the grassroots campaign organisation set up to support Labour Party leader Jeremy Corbyn.

In London, crowds chanted outside the gates of Downing Street and waved homemade placards.

Laura Parker, Momentum’s national co-ordinator, told the crowd from a nearby stage: “This is our democracy and we will not let an unelected prime minister manage this power grab.

Diane Abbott, the shadow home secretary, also took to the stage to deliver a message from Mr Corbyn, saying that he “100 per cent supports this demonstration” and would soon be in No 10 as prime minister.

But some members of the crowd began to chant “where is Jeremy?” before others drowned them out by shouting “stop the coup”.

Alan Costar (65), Linda Abbott, (69) and Maureen Loney,( 73), arrived earlier in the day, brandishing banners and flags to convey their opposition to the suspension of parliament.

The trio of retired teachers carried an EU flag as well as placards reading “defend democracy” and “remain, reform, revolt”.

Ms Loney, who has a Slovakian son-in-law, said: “I feel that prorogation is cutting off our legs for any form of protest and the legs of parliament. I think that Boris Johnson is trying to hold Europe to ransom.

“What they actually should be doing is someone with a brain needs to stand up and say: ‘Sorry folks, we actually got it wrong.’ It [leaving the EU] isn’t the best thing for the country, it never was.”

Mr Costar, who is half-German, added: “I have a dual-national grand-daughter and I’m here for her. She’s two-and-a-half.

“My daughter has already done a master’s in Germany, effectively for free rather than for £18,000. There are so many advantages for young people. This is about the fourth or fifth time I’ve been up here to protest at various stages as its gone closer and closer to the edge.

“Boris has completely miscalculated if he thinks the German government will cave on its principles for a few car exports. He doesn’t understand German post-war history.”

Linda Abbott, who is Ms Loney’s sister, said: “The reason that I’m here is that I really do feel that enough is enough.”

Tish Mantripp was joined by her boyfriend, Luke Hallows carrying a homemade placard depicting Donald Trump as Dr Evil from the Austin Powers movies and Johnson as the fictional villain’s sidekick Mini-Me. Mantripp, from Buckingham, said she made her sign on Saturday morning after dreaming up the idea.

Asked about suspending parliament, she said: “It’s f**king nuts. It’s just ridiculous. It’s really underhand I think. Obviously, I voted remain but even so every MP has been voted in to represent constituencies and I just feel it’s shutting down any voice. It’s just Boris Johnson becoming a bit of a dictator. It just seems like bully boy tactics.”

Mr Hallows, from Brighton, said his placard showing the prime minister as “Chuck Boris” was made from a discarded beer box last night. He said: “With Brexit, everything that’s going to happen is going to happen, but there are certain ways to do it. Deciding your going to shut everything down isn’t the way to do it.”

Steve Ferguson, from Bournemouth, was at the protest with his partner, Carly. The pair, calling for the defence of democracy, were wearing customised T-shirts depicting Mr Johnson as a clown.

Mr Ferguson, whose T-shirt quotes the Manic Street Preachers’ lyrics “if you tolerate this then your children will be next”, said: “We have come here today to show that we are unsatisfied, discontented with the way Boris Johnson is taking over parliament, closing it down. I think that he’s using it just so he can force his no-deal Brexit through. That’s not the democratic way of doing things.”

Carly, whose T-shirt displayed Mr Johnson as a clown with the message “worst BJ ever”, said: “We’ve got teenagers just going into work and you worry for them.”

Scotland Yard said: “A proportionate policing plan is in place. Any public order incidents will be dealt with appropriately.” - Guardian