Despite promise to intensify talks, UK has not tabled proposals for alternative to backstop 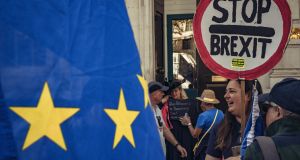 Demonstrators outside the cabinet office in London on Friday. Former prime minister John Major has announced that he will join one of several legal actions to block Boris Johnson’s move to suspend parliament. Photograph: Tom Jamieson/New York Times

The British government has not yet tabled any proposals to the European Commission to change the backstop, despite claims in London that negotiations between the two sides would be intensified.

The commission said that it was engaged in “technical discussions” with the UK but confirmed that no proposals or text on the backstop had been advanced by the British.

“We expect the UK to come forward with concrete proposals that are compatible with the withdrawal agreement before we can take these discussions further,” a commission spokeswoman said.

Sources in Brussels played down claims by the British government that negotiations were intensifying, but said that the technical discussions would continue between officials next week. There was, according to one official, “nothing consequential” emerging from a meeting between senior British official David Frost and Michel Barnier’s officials this week.

However, one senior Brussels source also warned that the European Commission would not be used as a pawn in British politics. “We won’t be part of their election planning game,” the source said.

Up to the UK

Minister for Foreign Affairs Simon Coveney reiterated that it was up to the UK to “propose alternatives that can solve those problems”.

Mr Coveney was speaking after a meeting with the British foreign secretary Dominic Raab on the fringes of an EU meeting in Helsinki.

British prime minister Boris Johnson on Friday promised to “step up the tempo” in the talks with Brussels, with the UK’s negotiators set to meet their EU counterparts twice a week in the run-up to a crucial EU summit on October 17th.

Speaking to the BBC, he said: “We are working together now on serious ways that we can change the current agreement, get out of that mistake and do a deal.”

But the revolt against Mr Johnson’s decision to suspend parliament for five weeks grew on Friday, with former prime minister Sir John Major announcing he would join one of several legal actions seeking to block the move.

Large demonstrations against the proroguing of parliament and against a no-deal Brexit are also expected in London on Saturday.

Opponents of Mr Johnson’s strategy appear increasingly confident of finding a way to block a no-deal Brexit when the Commons returns from its summer break on Tuesday, with indications that some Tories who are against a no-deal Brexit are willing to join with opposition MPs to seize control of the business of the House. This could enable them to schedule votes to block a crash out of the EU.

Tory rebel Sir Oliver Letwin said he had been in talks with speaker John Bercow about the parliamentary procedures that will apply, a revelation which gave rise to fierce criticism of Mr Bercow from Brexiteers, as the atmosphere in the UK becomes ever more partisan.

In the North, a senior police commander has said that a no-deal Brexit could prompt a year-long upsurge in dissident republican violence.

Assistant Chief Constable Barbara Gray said Brexit would likely become a motivating factor for extremists in the event of a disorderly exit.

“We predict that a six to 12-month period, if there’s a no-deal Brexit, that there could be an upsurge in violence,” she said.