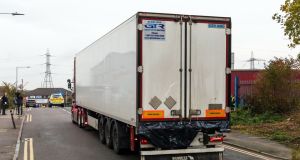 Police drive the lorry container along the road from the scene in Waterglade Industrial Park in Grays, Essex, Britain. Photograph: Vickie Flores/EPA

Trafficking gangs are using increasingly sophisticated methods of hiding migrants onto lorries without drivers’ knowledge, hauliers have said in the wake of the Essex truck tragedy where 39 migrants were found dead in a trailer.

The only suspect arrested to date was a lorry driver, a man (25) living in Co Armagh, who was being questioned on Wednesday night by Essex Police in connection with the matter, which is being treated as mass murder.

Rod McKenzie of Britain’s Road Haulage Association urged the UK’s, Ireland’s and other European governments and police agencies to do more — and use more technology — to combat what he said are new trends in the global migrant crisis.

Techniques used by trafficking gangs in recent years — including makeshift roadblocks to slow cross-channel lorries and threatening drivers with violence to allow migrants onboard — are being forsaken for more advanced methods, according to the freight companies representative.

“Now we are seeing a trend of greater sophistication,” he said.

“The back hinges of lorries are removed, so the whole door comes off. Migrants are then put on board and then the hinges are screwed up again, all without the driver’s knowledge — perhaps while he is asleep or through some other circumstances.”

Mr McKenzie said when drivers do their regular “walkaround” checks of their lorry “there won’t be any obvious evidence of tampering of the locks, the classic thing of the locks being jemmied open.”

“It is often not that obvious, when the driver does a walkaround, you can’t see that something untoward has happened,” he said.

Mr McKenzie said “most drivers are extremely diligent about doing walk-around checks and flagging to authorities if they believe something untoward has happened.”

“But what they need, apart from that daily walkaround, is support from the authorities, from law enforcement agencies, who need to be much more thorough, to use more technology to catch the migrant gangs — not the migrants themselves, who are desperate people, obviously at the end of this chain — but the migrant gangs who are cynical, manipulative and evil people, who are using increasingly sophisticated methods,” said.

“We also need governments — not just the UK government or Dublin but also continental governments — to take this matter more seriously and deal with the problem of migrants coming in from North Africa, the Middle East and other areas, often desperate, often prepared to do anything, and being manipulated by these highly sophisticated, evil gang-masters.”

Where authorities in Calais in France are using “more sophisticated, more technological solutions” including heat sensors, CO2 monitors and sniffer dogs, other port authorities are not, he said.

“That has opened opportunities at perhaps less guarded ports like Zeebrugge, and that is how this kind of situation has developed,” he said.

The trailer that the 39 bodies were found in was carried on a sailing that arrived from Zeebrugge in Belgium to Purfleet in Essex late on Tuesday.

“My understanding is that the security, the technological options, at Zeebrugge for the authorities are less rigorous,” said Mr McKenzie.