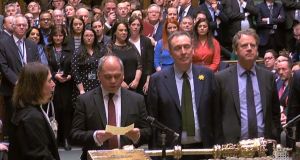 The currency was up for much of the day, but it picked up momentum in the London evening after MPs in the House of Parliament narrowly voted for an amendment that is aimed at staving off a no-deal Brexit

Sterling extended its rally on Wednesday evening as UK parliamentarians voted to rule out exiting the European Union under any circumstances without a deal, fuelling fresh speculation of a soft Brexit or a second referendum.

The UK currency had soared by 1.8 per cent to $1.3307 at 8.15pm, having been trading 1.1 per cent higher against the dollar shortly before members of parliament in the House of Commons started to vote on the matter. Sterling jumped by 1.4 per cent to 85.11p against the euro, having earlier traded 0.7 per cent higher.

Members of parliament voted in favour of amendments calling for a rejection of disorderly no-deal Brexit at any time under any circumstance.

The currency was up for much of the day, but it picked up momentum in the London evening after MPs in the House of Parliament voted for an amendment that is aimed at staving off a no-deal Brexit, which economists have said could deal a catastrophic blow to the British economy.

George Cole, analyst at Goldman Sachs, said ahead of Wednesday’s vote that “we now expect an article 50 extension, and our economists’ base case remains that a deal is eventually passed, which should lead to a modestly stronger sterling and higher Gilt yields.”

Meanwhile, Dean Turner, UK economist at UBS Wealth Management, said the bank had advised clients not to take “directional views on sterling [given recent volatility] and continue to hedge downside risks. Our expectation is that Brexit will be delayed,” he added.