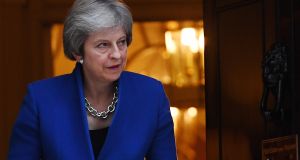 British prime minister Theresa May: her greatest defence remains the absence of plausible alternatives and the destructive potential of a leadership contest at a crucial stage in the Brexit negotiations. Photograph: EPA

Last weekend, unnamed Conservative Brexiteers were warning that when Theresa May was summoned to the weekly meeting of the 1922 Committee, it would be a “killing zone” with assassination in the air.

“The moment is coming when the knife gets heated, stuck in her front and twisted. She’ll be dead soon,” one former minister said.

But when the prime minister walked into the meeting of Conservative backbenches on Wednesday night she was greeted with a clamour as MPs banged tables, walls and doors in appreciation.

“It’s not Daniella in the lion’s den. It’s a petting zoo. It’s a love-in,” veteran MP Michael Fabricant told reporters outside the meeting.

May had not been summoned to the meeting but asked to address the backbenchers, calling for their support as she enters the final stage of the Brexit negotiations. The disquiet that boiled over into last weekend’s lurid language about killing zones was provoked by the prime minister’s announcement that she was considering an extension to the post-Brexit transition period beyond December 2020.

Her statement in the Commons on Monday, when she set out four conditions for resolving the issue of the Northern Ireland backstop, reassured Brexiteers. She demanded that a UK-wide backstop should be made legally binding so that a Northern Ireland-only backstop would no longer be needed.

She said neither the backstop nor an extended transition should last indefinitely and reassured Northern Ireland’s exporters that they would still have unfettered access to the market in the rest of the UK. Although May’s words left her some room for manoeuvre, they were tough enough to reassure most backbenchers that she was hardening her position.

The anonymous MPs responsible for the grisly quotes at the weekend strengthened the prime minister’s position by winning her sympathy across the House and inhibiting any of her own MPs from questioning her too harshly either on Monday or during prime minister’s questions on Wednesday.

But May’s greatest defence against defenestration remains the absence of plausible alternatives and the destructive potential of a leadership contest at a crucial stage in the Brexit negotiations. And even if most of her MPs are unhappy with the deal May is likely to bring home from Brussels, none of her potential successors could secure a better one.

Still, the prime minister has had successful turns at the 1922 Committee before, only for her backbenchers’ mutinous spirit to return days later. Wednesday night’s display of loyalty and affection is unlikely to last any longer than its predecessors.