Newton Emerson: Leo Varadkar continues to show a tin ear to the North 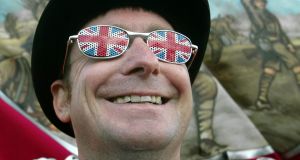 Has it been necessary for the Taoiseach to leave huge swathes of the unionist population convinced Dublin is on manoeuvres for Irish unity? Photograph: Paul Faith/PA

To Sammy Wilson, the DUP’s Brexit spokesman, the Taoiseach has become “vile Varadkar”.

Wilson hit out after the Taoiseach presented a copy of this newspaper to EU leaders in Brussels last Thursday, with a front page story on the 1972 IRA bombing of Newry’s customs post, in which nine people died.

Varadkar was citing Troubles violence out of context, Wilson raged, fitting a pattern of “threats, deception and rhetoric” from the Taoiseach in Brexit negotiations.

The DUP cannot be allowed to set standards of reasonable behaviour for the Irish Government, otherwise it would never meet them. But one of the dangers of Brexit chaos in London is that Dublin’s standards appear above reproach. That is not always the case and last week’s performance was certainly one such incident.

Nationalist and Alliance politicians responded to Wilson’s remarks by saying Varadkar had used The Irish Times as a warning rather than a threat. However, the word the Taoiseach himself used was “prop” – he said the front page was “a useful prop to demonstrate” his argument.

This gauche phrase showed a typical tin ear to northern sensitivities. It is not that Varadkar lacks the best of intentions. It is just that he appears to view the possibility of violence as another piece in Brexit’s logical puzzle, without an instinct for how delicately that piece should be played.

The Irish Government has a responsibility not to be complacent or to surrender a negotiating advantage. Unlike a sea border there is a real risk of violence at a hard border, which makes it trite to throw the “de-dramatisation” cliche back at Varadkar, tempting though that might be. But the Taoiseach could deconstruct the possibility of violence. He could be clear, for example, that Brexit may affect the Belfast Agreement but does not breach it, and that nobody envisages new passport controls, road closures or routine queues for motorists under any circumstances – all widespread public concerns from both a practical and security perspective.

The worst-case scenario for a hard Brexit set out by Ireland’s Revenue Commissioners – before Varadkar ordered them to stop planning for it – was of a dozen official crossings with Customs posts set 10 to 20 miles back, plus cameras and Customs officers with mobile equipment to enforce the remaining 200 crossings. A small percentage of commercial vehicles would be stopped, a smaller percentage again physically inspected and no other traffic would be delayed or disrupted.

The Taoiseach has been well within his rights to rule this unacceptable, to refuse to hand London a negotiating advantage by planning for it, and to warn that even such limited infrastructure would create a bonanza of terrorist targets, putting Customs officers and commercial drivers in mortal danger.

The very strength of that warning could have facilitated reassurance on wider public concerns without weakening the Irish Government’s position. Instead, Dublin has presented a binary “backstop or disaster” picture in which the fears of people along the Border have too often functioned as another useful prop.

Obviously, Varadkar will be acclaimed if this works and delivers a fully open border, or better yet keeps the whole UK effectively inside the customs union and single market.

The price of that success has clearly been calculated as short-term damage to North-South and east-west relations, as well as jangled nerves and heightened tensions within Northern Ireland. This is a normal aspect of political negotiations, including in Northern Ireland, where every Stormont crisis involves years of divisive argument followed by sudden professions of peace and partnership.

Is all the short-term damage this time proportionate, however, and is Varadkar the person to gloss over it afterwards? Has it been necessary for him to leave huge swatches of the unionist population convinced Dublin is on manoeuvres for Irish unity? How will that tin ear serve the Taoiseach once he needs to work with the Conservatives, the DUP and Sinn Féin to put Stormont and Anglo-Irish relations back together again?

And what if the hardball approach is not a complete success?

Everyone knows the Tories will throw the DUP under a bus when the time for compromise arrives. Varadkar has persuaded the Irish people Brussels will never do the same to them because they are EU members and the EU is defending Ireland to protect the fundamental integrity of its rules-based order.

However, the EU views the backstop as a breach of its rules and a concession to Ireland, so it is quite likely to compromise on this when push comes to shove.

The message of the Irish Government’s Brexit strategy is that all its demands will and must be met, because any inland customs infrastructure anywhere on the island of Ireland would be such a self-evident provocation and breach of the Belfast Agreement that violence would be inevitable.

Perhaps that will be enough to ensure no camera ever graces a pole on any route across the Border. But what a risk to run.

1 The real Contagion virus is out there and it’s causing virologists to worry
2 Man found guilty of murdering girlfriend during drinking session
3 Cork shootings: Father and sons to be buried in two separate funerals
4 First full moon on Halloween night since 1955 will be rare ‘blue moon’
5 Medical gaslighting: The women not listened to or viewed as overdramatising or catastrophising
Real news has value SUBSCRIBE