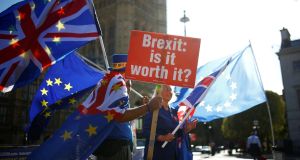 Companies have had to contemplate the potential consequences of major disruptions to both the Irish economy’s capacity to trade and their own supply chains in the event the UK “falls out” of the EU next March. Photograph: Reuters

Irish business sentiment slipped to a six-year low in the third quarter as fears of a no-deal Brexit weighed on confidence.

The mood among companies has fallen back “markedly”, the latest KBC Bank and Chartered Accountants Ireland survey found, as businesses started to consider the possibility of a “breakdown Brexit” rather than a “Brexit bump”.

The autumn business sentiment index came in just below where it was two years ago in the quarter following the result of the Brexit referendum in the UK. As such, it was the lowest reading since the winter of 2012.

“Brexit is overwhelmingly seen as an unclear and present danger to Irish economic prospects, with 67 per cent of companies citing it as the major risk to the economy in the coming year,” said KBC Bank Ireland chief economist Austin Hughes.

Overheating in the Irish economy, the next highest ranked concern, was cited by just 9 per cent of companies.

“This indicates how pervasive Brexit worries have become of late,” Mr Hughes said.

Companies have had to contemplate the potential consequences of major disruptions to both the Irish economy’s capacity to trade and their own supply chains in the event the UK “falls out” of the EU at the end of March 2019 without agreeing a deal.

A notably more uncertain outlook may already be leading some firms to curtail the pace of growth in activity and employment, adopting a “wait and see” mentality during the final months of negotiations between Westminster and Brussels. Others, meanwhile, may be encountering sector-specific “speed bumps” related to Brexit.

Construction firms were particularly wary about the near-term outlook, but there was also a clear downgrading of growth prospects by manufacturing and consumer-focused companies.

“It remains the case that activity and employment are increasing across the main business sectors, but the spread of gains has narrowed as firms adopt a more cautious approach,” said Chartered Accountants Ireland chief executive Barry Dempsey.

The drop in Irish business confidence mirrors a similar recent deterioration in UK order books, underlining the links between business conditions on either side of the Irish Sea.

The survey reflects the opinions of 205 chartered accountants working as chief executives, managing directors and finance directors in leading Irish companies. It was conducted from October 10th to 15th, in the wake of Budget 2019.

While some 47 per cent of companies see Irish economic growth, 29 per cent expect stronger growth.

Meanwhile, a divide in productivity between foreign and domestic controlled enterprises in Ireland is hiding weaknesses in the Republic’s economy, a new economic review has claimed.

The Nevin Economic Research Institute said three economies had emerges on the island of Ireland, with foreign and domestic controlled Republic of Ireland economies alongside the Northern Irish economy.

The foreign-controlled sector of the economy in the Republic is substantially more productive than the domestic economy, the report said. The Republic performed well domestically in manufacturing, transportation and storage, professional, scientific and technical activities, and administrative and support service activities. However, the domestic economy was weaker compared to its European counterparts in information and communication, and real estate activities.

However, the report also noted there was a “significant gap” in labour productivity between Northern Ireland and the Republic, with the North’s economy showing a consistent negative gap.