Why Theresa May’s plan to bypass Barnier was doomed

Speaking at an EU leaders summit in Salzburg, Taoiseach Leo Varadkar has said that the Irish Government is preparing for the possibility that the EU and UK fail to agree a Brexit deal. Video: EU Commission 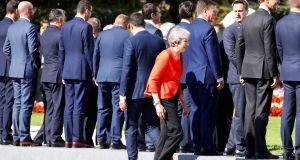 Back of the line: UK prime minister Theresa May in Salzburg, Austria. Photograph: Leonhard Foeger/Reuters

The British government has been putting it about for some time that Theresa May was planning to appeal above the head of the EU’s Brexit negotiator, Michel Barnier, to her fellow heads of government. The idea has apparently been to reach beyond the so-called European Commission bureaucrats and appeal directly to her fellow politicians. Although it is entirely appropriate for the prime minister to speak directly to other prime ministers, the notion of bypassing the EU’s negotiator was always destined to fail. It was, as the joke goes, like crime in a multi-storey car park. Wrong on so many different levels.

The strategy reached its intended height at the recent informal EU heads of government in Salzburg. May was afforded the opportunity to present her most recent thinking on Brexit to her colleagues over dinner. They listened courteously and probably with some sympathy for her domestic political travails. That was it. May also had some useful bilateral meetings in Salzburg, including with Taoiseach Leo Varadkar. The EU 27 then reaffirmed their full backing for Barnier. No surprise for anyone.

Nevertheless, on her flight back to London, May might have wondered briefly why her pleadings had not led to any watering-down of the EU’s negotiating position.

The most obvious reason is that Barnier’s mandate comes from the heads of government themselves. He is doing precisely what they have made clear they want him to do. He is carrying out their wishes calmly and effectively. The process of formulating the EU’s position on Brexit has from the beginning been exceptionally open and intensive.

All member states have had the opportunity to shape the EU’s overall strategy and detailed negotiating approach. In addition to the European Council itself, the member states meet very frequently with Barnier and his task force in the General Affairs Council, in the Committee of Permanent Representatives and at the article 50 committee. Each member state also meets the commission team frequently on a bilateral basis. These meetings ensure that Barnier is aware of every evolving nuance in each capital, and above all in Dublin.

Another reason why May should not be surprised that her words failed to lead to any breakthrough in Salzburg is that the UK’s partners were, of course, already intimately aware of the UK’s negotiating positions. Those positions have been reported faithfully and in detail to other member states after every negotiating session between British and European negotiators. Moreover, the UK has been working hard to make known its views directly in capitals around Europe, including at political level. Their arguments naturally receive a polite hearing wherever they go. However, any impact of such visits will already have been fed by member states into the EU’s overall negotiating approach in advance of Salzburg through the open channels available to them. Incidentally, an issue on which partners are particularly well briefed is the Belfast Agreement. The subtleties and complexities of Northern Ireland are very well understood around European capitals.

To the extent that EU governments have not been convinced by British negotiating positions, it has precisely nothing to do with getting access to the right interlocutors. It is simply that the British views have not been sufficiently convincing. No more, no less.

Experienced British officials know all of this well. The UK used to understand the EU’s decision-making processes better than anyone. It was therefore able to exert exceptional influence in the EU until the decision to leave. One hopes that some of those British officials are still speaking up and being listened to in London.

There are probably many reasons for the contrived fiction about bypassing Barnier. For a start it is difficult for anyone to accept that their arguments are simply not gaining traction. It also feeds comfortably into the British tabloid narrative about Brussels bureaucracy. The fiction seeks to shift the focus from the British red lines, which define the limits of a solution but are apparently sacrosanct, towards the EU’s stance in defence of its basic principles, which it suits some to portray as inflexible.

Moreover, the nonsense about Brussels bureaucrats helps the British government to argue domestically that a solution would be at hand if only the right people would engage. It helps to keep alive the illusion that the German and French business cavalry are about to appear on the horizon, riding to the UK’s rescue, although it is clear that the cavalry are sitting comfortably back at base camp.

I hope a reasonable agreement can be found in the Brexit negotiations. That would be in everyone’s interests. Ireland, as one of the most affected member states, will certainly work to that end. However, the UK’s search for workable compromises means the ongoing painful slog of engaging with the EU’s negotiators rather than deluding itself that better ones can be found.

Bobby McDonagh is a former Irish ambassador to the UK, Italy and the EU