Thatcher ceremonial funeral to be held on April 17th

Shoppers on Dublin's Grafton Street take a moment to reflect the life, work and death of Margaret Thatcher. Video report by Jason Kennedy. 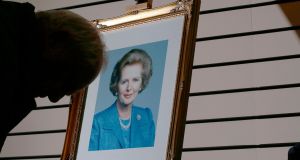 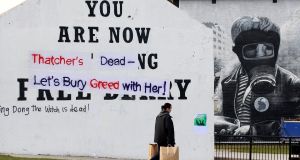 A woman walks past graffiti daubed on the Free Derry Corner in the Bogside area of Derry, Northern Ireland today. Photograph: Cathal McNaughton/Reuters 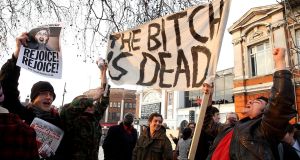 People hold banenrs and signs aloft as they celebrate the death yesterday of former Margaret Thatcher following the announcement of her death in Brixton. Photograph: Danny E. Martindale/Getty Images 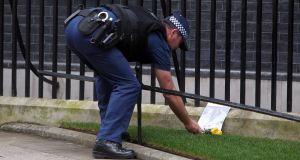 A policeman lays flowers and a tribute outside 10 Downing Street in London, the day after Baroness Thatcher died at the age of 87 following a stroke. Photograph: Steve Parsons/PA Wire 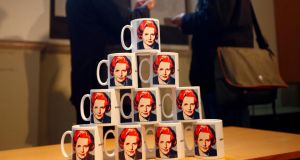 Late former British prime minister Margaret Thatcher will receive a funeral just one step short of a full state ceremony on April 17th, the British government announced, a day after the UK's only woman prime minister died at the age of 87 following a stroke.

The former premier will receive a ceremonial funeral in London's St Paul's Cathedral with full military honours - the same status as accorded to the Queen Mother in 2002 and Diana Princess of Wales in 1997, in recognition of her influence on the nation.

The date was decided after consultation with Ms Thatcher's family and Buckingham Palace, prime minister David Cameron's office said in an e-mailed statement.

Queen Elizabeth II will attend the funeral accompanied by her husband Prince Philip, the Duke of Edinburgh, her office said. It is the first time she will have attended a service for a former prime minister since the funeral of Britain's wartime leader, Winston Churchill, in 1965.

Both houses of parliament have been recalled from their Easter vacation tomorrow to pay tribute to Mrs Thatcher, who was prime minister from 1979 to 1990.

Lawmakers from the Conservative Party have praised her strength of character and her economic reforms.

Former British Labour prime minister Tony Blair said celebrations of Thatcher’s death were in poor taste. “Even if you disagree with someone very strongly, you can still particularly at the moment of their passing, you should show some respect,” he told Stephen Nolan on BBC Radio Ulster. When asked if he worried there would be similar celebrations when he dies, Tony Blair said “When you decide, you divide. I think she would be pretty philisophical about it and I hope I will be too.”

Meanwhile, political opponents questioned policies that that led to the decline of traditional industries such as mining and drove unemployment to a postwar high of 3.3 million in the mid-1980s.

"The right and the left have created myths about her government. They're fighting them out even over her memory."

Tom Pine, a lecturer in disaster management at the University of Hertfordshire who served in London's Metropolitan Police Service for 32 years, said the authorities planning the funeral procession will be anxious to prevent any disruption by Thatcher's political opponents.

"The police will be concerned that someone will try to disrupt or attack the funeral cortege to get maximum publicity for their political views," Mr Pine said in a telephone interview.

"Given what happened last night [celebrations regarding the death], the police will be looking at the extreme fringe of the left and perhaps those concerned about the current government's austerity measures."

Mrs Thatcher had survived an assassination attempt in 1984 when the Irish Republican Army bombed her hotel in Brighton during the Conservatives' annual conference, killing five people. She stuck to her schedule and addressed party members the next day.

"There is also a small but still active element of the IRA that will be examined by the police and security services to see if they pose a threat to security on the day," Mr Pine said.

Mrs Thatcher's body was moved from the Ritz Hotel in central London in the early hours of today and taken to an undisclosed location as preparations for the funeral began.

She had been convalescing in the luxury hotel since coming out of hospital in December. Her remains will be cremated in a private ceremony, Mr Cameron's office said yesterday.

State funerals are generally reserved for monarchs, though they differ little from ceremonial funerals, in which the carriage bearing the coffin is drawn by horses, rather than sailors from the Royal Navy.

Mr Churchill was the last non-royal to receive a state funeral in 1965. Others who have been given the honour include Admiral Horatio Nelson, who died during the Royal Navy's victory over the French and Spanish fleets in 1805, and 19th-century prime ministers including William Gladstone.

Ms Thatcher's coffin will initially be taken to the Chapel of St Mary Undercroft, a private church used by lawmakers in the 11th-century Westminster Hall, the oldest part of Parliament. The Queen Mother's coffin lay in state in the hall itself for the public to file past.

The remains will later be taken to the Royal Air Force chapel of St Clement Danes on the Strand, just outside the City of London financial district.

From there, her remains will travel in procession to St Paul's, within the City, less than a mile away, in a carriage drawn by the King's Troop Royal Horse Artillery. The route will be lined from military representatives.

On the steps of St Paul's, Mrs Thatcher will receive a guard of honour from service personnel and retired military from the Royal Hospital Chelsea, known as the Chelsea Pensioners.