Terrorist tried to hire lorry ahead of London Bridge attack 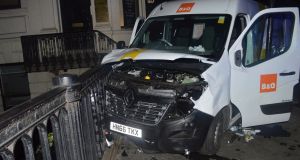 One of the men behind the London Bridge terror attack tried to hire a 7.5-tonne lorry hours before the attack, police have said.

Detectives suspect the damage inflicted could have been even worse if Khuram Butt had not failed to secure the vehicle because his payment did not go through.

Instead he resorted to “plan B” and rented a white van which ploughed into pedestrians as the perpetrators launched their deadly rampage last Saturday night, killing eight victims and injuring dozens more.

After leaving the vehicle, the terrorists stabbed five people to death around Borough Market.

It also emerged that multiple petrol bombs were found in the van, while a copy of the Koran opened at a page “describing martyrdom” was discovered in the east London flat where the three men plotted the attack.

Commander Dean Haydon, head of the Metropolitan Police’s Counter Terrorism Command, revealed that Butt had attempted to hire a lorry online on the morning of the atrocity.

He said: “Because of the fact his payment method failed he couldn’t get hold of that lorry.

“My view at the moment is that he then went to plan B and ended up hiring the van instead.”

The van travelled over the bridge twice before it was driven at speed at pedestrians.

It is thought three victims were killed on the bridge – including one man who was thrown into the Thames – before the attackers left the vehicle.

Mr Haydon said: “When I come back to Butt trying to get hold of a 7.5-tonne lorry – the effect could have been even worse.”

The potential for large vehicles to inflict mass casualties was laid bare last year when a lorry drove through crowds gathered to celebrate Bastille Day in Nice, killing 86 people and injuring scores more.

Fears that the London Bridge trio planned an even more deadly strike were also heightened by the discovery of items in the white Renault van they used.

In the back of the van used officers found 13 wine bottles filled with flammable liquid with rags wrapped around them in the shape of Molotov cocktails, along with two blow torches.

Mr Haydon said: “It’s feasible when you look at their actions, they were still fairly close to the van, there is a possibility they could have come back to the van.

“Was there a plan B that, after they had stabbed individuals, were they then planning to come back to the van and ignite the Molotov cocktails and that was a secondary attack?

Butt and his two accomplices, Rachid Redouane, (30) who claimed to be Moroccan-Libyan and lived in Ireland for a time, and Youssef Zaghba, a 22-year-old Italian national of Moroccan descent, were shot dead by armed police eight minutes after the first emergency call.

An investigation was launched in the wake of the attack, with 18 people arrested so far.

Thirteen have been released without charge, while five men aged between 27 and 30 remain in custody.

Searches have been carried out at 12 properties, with eight ongoing. Detectives expect further searches and arrests to be made in the coming days.

Police have made a number of international inquiries as they work urgently to establish how the three attackers knew each other, as well as investigating whether they were helped through funding or any other means.

Mr Haydon added: “We are not looking at the moment for a wider network.

“It looks as if it is pretty much a contained plot involving the three of them, which is supported by the forensic evidence we’ve got back so far.”