Syria air strikes may have been illegal, says Corbyn 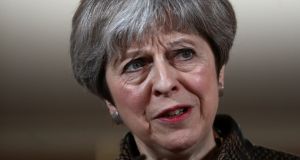 Theresa May will emphasise the broad support the military action received from other western governments. Photograph: Simon Dawson/Reuters

Theresa May will face criticism on Monday from MPs, including some in her own party, for her failure to seek prior authorisation from Parliament before launching air strikes against Syria on Saturday. The prime minister will make a statement to the House of Commons on the attacks on Monday afternoon, after which MPs will hold an emergency debate, which will be followed by a vote.

Ms May will argue that Saturday’s operation was both legal and justified on humanitarian grounds as a deterrent against further use of chemical weapons and that it was in Britain’s national interest.

Although only the United States, France and Britain took part in the bombardment, Ms May will emphasise the broad support the action received from other western governments.

“We have done it because we believed it was the right thing to do. And we are not alone. There is broad based international support for the action we have taken,” she will say.

Labour leader Jeremy Corbyn called on Sunday for a war powers Act to prevent the government from taking military action without parliamentary approval. Mr Corbyn said the air strikes may have been illegal, despite the government’s assertion that it was allowed under international law to take military action to alleviate overwhelming humanitarian suffering.

The Labour leader said the concept of humanitarian intervention was contested and that the only legal bases for military action were self-defence, or the authority of the UN security council.

“I think parliament should have a say in this, and the prime minister could quite easily have done that. What we need in this country is something more robust, like a war powers Act, so that governments do get held to account by parliament for what they do in our name,” he said.

Foreign secretary Boris Johnson said the air strikes were designed to deter Bashar al-Assad’s regime and others around the world from using chemical weapons.

“It’s important that we understand the limits of what we are trying to do. This is not going to turn the tide of the conflict in Syria; one can hope it encourages the Russians to the negotiating table in Geneva, to get a political process properly going – but that is, as it were, an extra. The primary purpose is to say no to the use of barbaric chemical weapons,” he said.