Downing Street will seek a UK-wide customs backstop, which will alarm Brexiteers 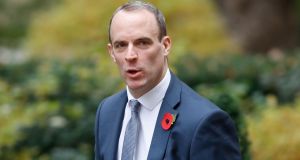 Britain’s Brexit Minister Dominic Raab: admitted he underestimated the consequences of crashing out of the EU without a deal. Photograph: Tolga Akmen/AFP/Getty Images

When Theresa May’s cabinet meets over the next few days to consider the latest proposal for a Brexit deal, ministers will be under pressure to approve it without delay. The prime minister is eager to have the deal agreed at a special EU summit before the end of November, and that requires an agreement in principle by early next week.

As details of the proposed backstop deal have emerged in recent days, Conservative Brexiteers have become increasingly alarmed at what it involves. To avoid a Northern Ireland-specific backstop, May has sought a UK-wide customs backstop that would see the country remain effectively within a customs union with the EU until another solution is found to keep the Border open.

Although Downing Street insists that the UK-wide backstop means there will be no Northern Ireland-specific backstop, it will include a number of measures on customs and the regulation of goods that will only apply to Northern Ireland.

“There are going to be divergent and possibly contradictory narratives about this but if the British want to deceive their public about what it means, that’s up to them. Maybe that’s what it takes,” a senior EU source said.

The EU says there can be no UK-wide customs agreement without substantial “level playing field” guarantees. These are designed to ensure that British producers do not enjoy a competitive advantage over their EU counterparts, and their scope is likely to reflect the language of the EU’s negotiating guidelines on its post-Brexit relationship with Britain.

“The aim should be to prevent unfair competitive advantage that the UK could enjoy through undercutting of levels of protection with respect to, inter alia, competition and state aid, tax, social, environment and regulatory measures and practices. This will require a combination of substantive rules aligned with EU and international standards, adequate mechanisms to ensure effective implementation domestically, enforcement and dispute-settlement mechanisms in the agreement as well as union-autonomous remedies,” the March 2018 guidelines said.

This demand, which is particularly important to those member states with the closest trading links with Britain, is potentially more difficult for Brexiteer ministers to accept even than the terms of the backstop itself. And the cabinet will have to be persuaded that a review mechanism operated by mutual consent can ensure that Britain is not trapped indefinitely in the limbo of the backstop.

EU ambassadors meet in Brussels on Friday afternoon for an update on the negotiations from Michel Barnier’s taskforce that was postponed from Wednesday, but the meeting will not make a decision on the next steps. If May’s cabinet approves a draft agreement that Barnier also finds acceptable, the European Council will start the process of preparing for a summit.

This will involve further meetings of EU ambassadors and sherpas from the 27 remaining member states before a meeting of foreign and European affairs ministers in the general affairs council and finally the European Council itself. In between, member states will need time to consider the agreement, and some governments will need to consult national parliaments before agreeing to any Brexit deal.

This means that the earliest likely date for the European Council is Sunday November 25th, which the Austrian newspaper Der Standard identified on Thursday. EU leaders often prefer to conduct sensitive business at weekends to avoid generating turbulence on the international markets.

EU leaders are due to meet in mid-December for their regular summit and many in Brussels are relaxed about delaying a Brexit deal until then. That would leave only a few days for MPs to debate the agreement before Christmas so that it might have to be delayed until the New Year, giving its critics more time to pick it apart.

Despite threats from the DUP and Conservative Brexiteers to join opposition MPs in voting against the deal, fear of the consequences of a no-deal Brexit will strengthen the prime minister’s hand. Brexit secretary Dominic Raab admitted this week that he had not appreciated how much Britain depends on one route across the Channel.

Raab is a diminished figure in Brussels, where he was initially welcomed as a breath of fresh air after David Davis but is now perceived as a lightweight ruled by personal ambition. His aggressive approach on the backstop and his conviction that Ireland is bluffing over the Border made him unpopular in Dublin almost from the start. But by blurting out that he underestimated the consequences of crashing out of the EU without a deal, the Brexit secretary has probably boosted the chances of a deal getting through cabinet and the Commons.