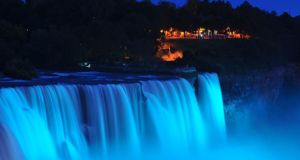 Visitors to Niagara Falls receive notice of the sex of the royal baby last night indicated by the blue light illuminating the water at Niagara Falls, New York. Photograph: Getty

Well, some of us aren’t too proud to say we enjoyed it immensely. If Kate wasn’t Too Posh To Push - she didn’t opt for the celebrity Caesarean - then we weren’t Too Posh To Watch.

What the heck, it wasn’t compulsory and in this life and in this media there’s always a shortage of happy drama.

From the moment the text came at 8.45am yesterday - “Kate’s in labour!”- until Michael Wolff of Vanity Fair explained on Newsnight that this story has the two things most loved by American women - “ a celebrity baby and the British royal family” - we were reassured, even in this country, that we were not alone on this earth in finding the latest royal birth fascinating, funny and , in fact, a weird fiesta.

If you find this attitude offensive then try thinking of the Windsors as Manchester United ...there, that feels better, doesn’t it?

Of course birth is the other great leveller. It was pretty painful to watch Kay Burley sweating it out in front of the Lindo wing of St Mary’s hospital, Paddington. Kay’s privacy was effectively breached from 1pm yesterday afternoon.

She laboured all day, delivering constantly in the sweltering heat. She stomped around talking to the general public. She got her producer to look up the new baby’s stars in the Evening Standard (the producer couldn’t find them; Kay said he wasn’t used to looking up his stars. Carole Middleton had told someone the baby was going to be a Leo. In fact he was born on the cusp).

Meanwhile, Sky’sbeautiful Rhiannon Mills was in Bucklebury in Berkshire, outside the Middletons’ house. Rhiannon was there all day. And the even more beautiful Becky Johnson was up at a maternity hospital in Liverpool, where Wayne and Colleen Rooney’s new baby, Anthony Klay, was born recently.

All Becky could find was shell-shocked young fathers advising William to do what his wife said.

It was a day for Sky News and for the tabloids, the media that makes the British royals a global soap opera and which, although no one says so, has saved it several times.

Much was made of the fact that the royal birth was going to be announced on an easel outside Buckingham Palace. Alastair Bruce, Sky’s royal commentator - as distinct from royal correspondent - got a good hour of air time out of that easel. Jeremy Thompson came out of retirement - or wherever it is he has been - to take over at Buckingham Palace. No one took over from Kay.

What is it about a royal birth that interests (some) people so much? It seems to send us feudal in some way, back to the reassurance of an unshakeable hierarchy. Back to the illusion that someone, somewhere, is living the perfect life. It is irrational, politically incorrect and probably pretty dumb.

But the people who criticise it are often superior in an unbecoming way - party poopers, in other words- who aren’t that worried about other social inequalities - although Joan Smith, an English republican, was terrific on Newsnight.

In Ireland royal watchers are in the closet still - there are quite a lot of corporate lawyers who relaxed in front of the recent documentary on Diana’s dresses. Who have discussed whether William was right in giving Kate Diana’s engagement ring. “We decided he was right,” said the corporate lawyer’s friend, herself a tough professional. “Better than having it stuck in a safe somewhere.”

The rest of us have had to accustom ourselves to startling realities - like the fact that this baby had its own Wikipedia page before he was born. Even if we never signed the baby guestbook, started online by ABC News in the United States, we know about it and how it has been signed not just by Americans, but by Kenyans, Singaporeans and Indonesians.

Even Niagara Falls has been dyed blue.

Meanwhile, in another example of misleading the general public, and of a general public just gagging to be misled, film star Kate Winslet, who is expecting her third child, earlier this month shared with OK! readers a brief exchange she had with the Queen when she went to Buckingham Palace to collect her CBE last year.

“The Queen asked her if she likes her job. Kate reveals: ‘I told her that I loved it but I love being a mum even more. The Queen said: ‘Yes, that’s the only job which matters’.”

Which is a bit rich coming from two such over-achievers; particularly from the Queen, who has been working non-stop since she was twenty and pretty much refuses to retire.

Whether this child, poor little thing, is indeed the saviour of the British monarchy, very much remains to be seen. He was already a money-spinner in the womb - he generated £260 million before he was born, according to media reports. .

But even the most enthusiastic royal watchers must acknowledge that, unfortunately for the new prince, the lives of the rich and famous are not terribly child-friendly. They are rich in nannies but poor in the things that children actually like - for example routine, living in one house all the time, and resembling your friends as much as possible.

It is fairly obvious that the British royal family, even in the last sixty years, has not been a pleasant place in which to grow up. Prince Charles’s childhood seems to have been miserable and damaging. Even Princess Diana, who was always going on about how much she loved children, sent Prince William off to be a weekly boarder at the Ludgrove prep school in Berkshire when he was eight.

We can acknowledge that whilst also acknowledging that interest in this new baby reaches far beyond the shores of the UK.

The joy at his birth is truly unconfined. It makes you question whether modern humans, for all our technology and sophistication, are really that different from our ancestors who lived centuries ago, and loved to worship their kings.